REVIEW OF OF JACQUIE ROGERS' SLEIGHT OF HEART


SLEIGHT OF HEART is the first of the High Stakes Heroes series by Jacquie Rogers. If you have read her Hearts of Owyhee series, you already know what a fun, fast-paced western historical romance Ms Rogers writes. In fact, Jacquie Rogers is one of my favorite authors, and the 1880’s are my favorite historical period in the Old West. 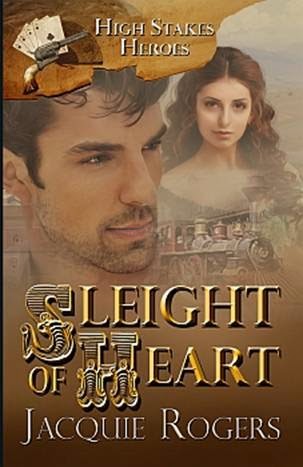 Lexie and Helen are in exile, so to speak, because Helen committed a social faux pas and embarrassed her parents and friends. Since she can’t be sent from Washington DC alone, Lexie has to put aside her dream to become a math professor to accompany Helen to a Colorado mine in which the family owns a share. The young women have to remain there until Helen’s blunder becomes old news. They’ve been in Silverton, Colorado a year and the mine barely makes enough money to pay the miners and expenses.

She is also in the duet with me titled MAIL-ORDER TANGLE.

Check all of her books on Amazon.

Find out more about her and her books at www.jacquierogers.com and http://jacquierogers.blogspot.com She also contributes to the this Smart Girls Read Romance.
Posted by Caroline Clemmons at 1:30 AM