Hallmark is Waiting for Me

As evident from this family photo of me and my three siblings, I was a big Christmas lover as a kid. ***Note. Hum Somewhere in My Memory from Home Alone as you read this. 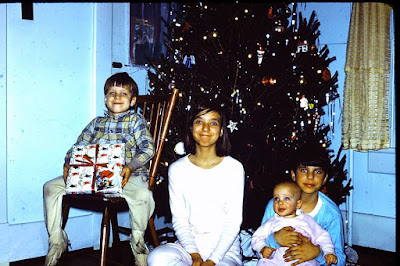 From age three until not quite six, I lived in Taiwan with my parents and younger brother, John, where my mom and dad taught English at Tunghai University. Christmas gifts were hand-me-downs from other Missionary families, which John and I were ecstatic to receive. We knew no better than gently used toys, until our family returned to America and we discovered modern toy stores, television, and were bombarded with commercials. The stupendous merchandise wowed us, and we were ardent believers in everything Christmas.

My grandmother, called Mommom, prepared for the big day all year long and was a devotee of the holiday. She made Christmas a mystical blend of the Nativity and Santa Claus, which worked for me. The generous old guy in the red suit was equally devoted to Christmas and a great boon to a family with limited funds. However, I learned Santa could be touchy and kept a naughty list. I hoped he had absentmindedly omitted my name. Fortunately, I also learned the Christ Child forgave sins, and prayed Jesus gave Santa a heads-up on the forgiving Beth thing. A miracle transpired because I never got switches in my stocking as my ancestral Uncle Gus was said to have done. That horrifying tale struck fear into his descendants, and I was super good those last few days before Saint Nick's timely arrival.
Visiting Mommom and my aunt, uncle, and five cousins at the old Virginia homeplace for Christmas was like being part of a Hallmark movie. Nothing could match the wonder I experienced there as a child. My uncle even reported seeing reindeer hoof prints in the snow on the roof, and one year a jovial neighbor dressed up as Santa--I recognized him-- came to the house to delight us kids. I was concerned this facade might offend the REAL guy, and he'd stay away. But we heard the sleigh bells out in the meadow, as we did each Christmas Eve. The warning jingle sent us scrambling to bed before Santa's arrival, and inspired the title of my holiday romance, Somewhere the Bells Ring. The home in this ghostly time slip Christmas romance was also inspired by the homeplace pictured below. Built in 1816, Chapel Hill, as it's called, has been in the family for generations and is where I spent some magical holidays. 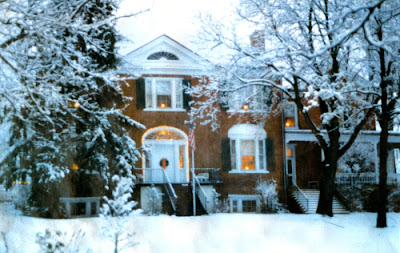 (Virginia Family homeplace in the Shenandoah Valley)
With such fantastic childhood memories, Christmas as a bigger kid/adult was a bit of a letdown. Maybe it is for everyone. Christmas really belongs to children, but I still cherish it in my heart. As Scrooge says after hard lessons learned, "I will honor Christmas in my heart and try to keep it all the year." And so I do.

My mantle is perpetually decorated with angels and lights. Also a Dalek Supreme and the Tardis...a little random, I suppose. Still, it's festive year round. The holidays can be rather overwhelming. I try to keep our celebration simple but fun, especially for the small people in my life. I truly must love Christmas because I've written three romances with the holiday as a central theme and I'm pondering a fourth. Maybe with an angel in the story...I love angels. But not the weeping kind, thanks to the creepy ones in Doctor Who.
Don't blink. 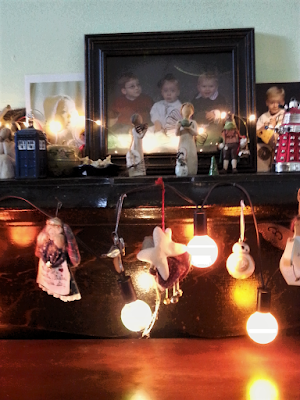 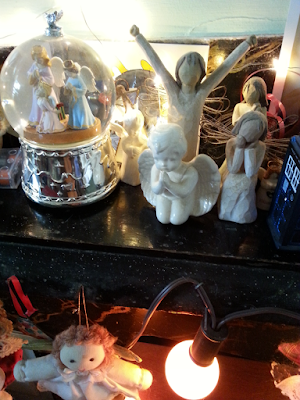 (I especially love angels.)
Several years ago, my mother found a number of vintage Christmas cards in an old trunk. This marvelous find took us on a trip down memory lane, back to people who lived before I was born. I'm terrible about remembering to send cards, but these are great. I may have shared some of them before, but here's another look at a few. 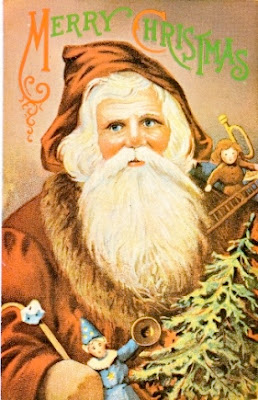 (Vintage Santa and a Norman Rockwell print on cards among Mom's finds.) 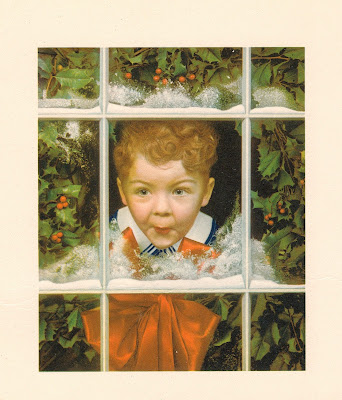 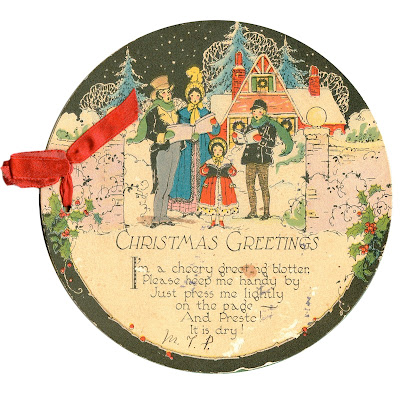 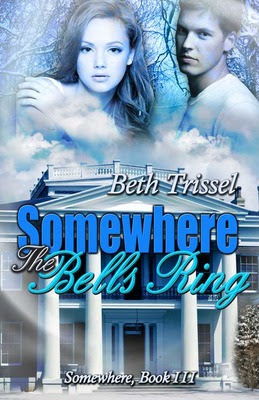 
December 1968: Caught with pot in her dorm room, Bailey Randolph is exiled to a relative's ancestral home in Virginia to straighten herself out. Banishment to Maple Hill is dismal, until a ghost appears requesting her help. Bailey is frightened but intrigued. Then her girlhood crush, Eric Burke, arrives and suddenly Maple Hill isn't so bad.
To Eric, wounded in Vietnam, his military career shattered, this homecoming feels no less like exile. But when he finds Bailey at Maple Hill, her fairy-like beauty gives him reason to hope--until she tells him about the ghost haunting the house. Then he wonders if her one experiment with pot has made her crazy.
As Bailey and Eric draw closer, he agrees to help her find a long-forgotten Christmas gift the ghost wants. But will the magic of Christmas be enough to make Eric believe--in Bailey and the ghost--before the Christmas bells ring?~
I really think Hallmark is waiting for me with this story.

From Romancing the Book: "Ms. Trissel captivates her reader from the moment you start reading the first page. She has written a compelling love story that spans some fifty plus years and keeps you entertained every step of the way with the story within a story...I fell in love with her characters and look forward to the next delightful story ready with Kleenex box in hand. A must read for every romance fan." ~Reviewed by Robin

Somewhere the Bells Ring is available in eBook from all online booksellers. Plus a smashing new audio version from Audible is out at Amazon. For the kindle and audio visit:
https://www.amazon.com/Somewhere-Bells-Ring-Time-Book-ebook/dp/B006530S2Q 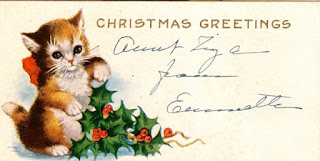 (Tag from the earlier 20th century)

by Judy Ann Davis
It's time to think about holiday baking. Below is my very favorite cookies I learned to make in Sweden when I was an exchange student. It is a delicate, crispy but crunchy cookie that is worth the time to make. Many people prefer not to roll the cookies over a round object, but leave them to cool flat. 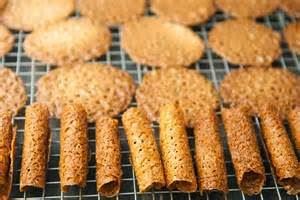 Grease and flour large cookie sheet. Into a large skillet, measure all ingredients except confectioners’ sugar.

Remove cookie sheet from oven and, with pancake turner, quickly remove cookies, one by one, and roll around handle of a wooden spoon, or drape over a rolling pin. (If cookies get too hard to roll, reheat in oven a minute to soften.)
Cool. Repeat until all batter is used, greasing and flouring cookie sheet each time. Lightly dust cookies with confectioners’ sugar. Makes about 2 1/2/ dozen cookies.

NOTE: Mixture will be hard to handle on humid days.

Looking for a gift for the holiday season for the person who reads? My collection of eclectic short stories, "Up on the Roof and Other Stories, which was republished recently, might be a great choice. Available in paperback and eBook.

UP ON THE ROOF  Amazon Buy Link:

Does it Snow in Portugal During the Holiday Season?

I had such fun writing A Portuguese Christmas, my sweet romance contemporary novella. And, in turn, I learned a great deal about Portugal, and the country’s lack of snow during the holiday season.

The story is set in December. Krystal Walters, the heroine, is an American professional surfer, and is competing in Portugal during the holidays in a world-class surfing event. She misses the snow, and envisions returning to her home in wintry Rhode Island to celebrate Christmas with her father.
However, the average temperature in Portugal in December/January boasts a high of 59 degrees, with temperatures dipping to a low 46 degrees. So, snow is very rare, especially in the cities, such as Lisbon.

Through my research, I also learned that Portugal’s climate is diverse. The river Tejo runs through Lisbon, and any regions south are warm and dry, and reportedly it’s only snowed there once in twenty years.
Any regions north of the river are rainy and cold in winter.

Here’s the first cover of A Portuguese Christmas.

The hero, Adolfo, is an olive farmer, and, to me, the above hero didn’t look like a man who farms. Those of you who’ve heard me praise my wonderful cover artist, know I trust her judgement. However, in addition to a hero who didn’t fit my vision, she forgot one important thing. There’s no snow in Portugal!

However, I LOVE the hero on my current cover, which was unanimously approved by my reader’s group!

The moment world-class surfer Krystal disappears under a mountain of sea water, Adolfo’s single-minded focus shifts from running his Portuguese olive farm to keeping the sun-kissed American spitfire safe. But first he’ll have to convince her that spending Feliz Natal with him isn’t the end of the world. Because she’s become the center of his.

Do you like snow during the holiday season, or do you prefer warm, sunny weather?


Snag your copy of A Portuguese Christmas  on Amazon! At other e-retailers.
Also available on Audio and Paperback.


Josie Riviera is a USA TODAY Bestselling Author of contemporary, inspirational, and historical sweet romances that read like Hallmark movies. She lives in the Charlotte, NC, area with her wonderfully supportive husband. They share their home with an adorable Shih Tzu who constantly needs grooming and live in an old house forever needing renovations. 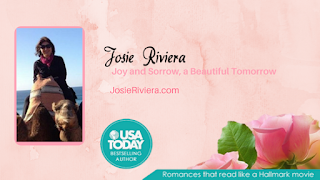