A Marathon, Not a Sprint - @JacquieRogers #writing #romance #editing


There's a lot of talk in the publishing world about word length.  Just a few years ago, there was no such discussion.  Authors and aspiring writers wrote manuscripts to the publishers' guidelines.  Well, things have changed, and in this case, for the better, because now a story can be the length it needs to be, rather than be crammed or padded to fit a set word count. 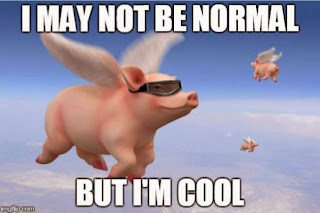 I love writing short stories (now called "single reads") but my primary focus is as a novelist and I'm writing one now.  Well, not now--I'm writing a blog article, but still.    Last month, I reported that I had 12,000 words written on Much Ado About Mustangs (Hearts of Owyhee #5).  I'm at 70,000 words now, so that's 58,000 words in 30 days.  Not bad for someone who has difficulty focusing on anything longer than about 60 seconds.

One of the best tidbits I heard when I started this gig (way back when) was that writing a novel is a marathon, not a sprint.  So how does someone with a very short attention span do this?  It's something I had to learn.  People like me can't just sit down and write.  I do my best thinking when I'm walking around.  In fact, between the second and third paragraph of this article, I had to get up and walk around, make some tea, and think.  Lesson learned: make what others consider a short-coming into your strong suit.

I'm a semi-plotter.  Before one word of the book gets written, I know my characters through and through, and I have a good idea of the story bones.  This also requires a lot of trips to view the flowers in the back yard, or maybe an occasional toilet cleaning.  Ah, the glamorous writing life.

A lot of times the story doesn't want to let me write it.  I used to think I was stuck, but now I know that story is stuck. Most of the time, it's because of author intrusion, meaning I'm trying to manipulate my characters so the plot I have in mind works out right.  The characters don't agree, so they go on strike.  If the snag isn't because of that, it's because the wrong character is telling the story at that moment.  Either of these things will throw me out of kilter and I need to get out of my chair and go do something else. 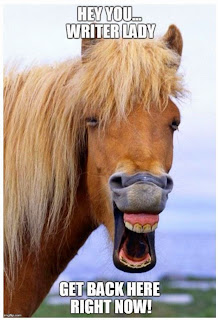 But the key is to get back to the computer.  All the while I'm unloading the dishwasher, or folding clothes, story ideas are loping willy-nilly in my head, crashing into each other.  Occasionally, one idea will beat the daylights out of the others, but most of the time, they meld into a series of whole new concepts.  Eventually, one of those new ideas will win out, and whether I'm in the middle of a chore or not, I must get my hiney back in the chair and start writing.

Another tip for those who have short attention spans is to write in different ways.  Sometimes I type, sometimes I use speech recognition, or maybe I'll take out the trusty yellow pad and a primitive writing device.  Sometimes I take my laptop to our downstairs theater, or out on the back deck, or to the coffee shop.  Sometimes it's all of the above.

Change improves my attention span... for a short time.  Then it's time to go do something else.  I dabble in graphics, play sudoku, or get on my exercise bicycle.  Oh, and the cool thing about smartphones is they have voice recognition, so you can say your ideas while peddling.  If you can breathe.

I'm hoping by my next Smart Girls Read Romance blog day, I'll have a new release to announce.  It's hard work, sometimes agonizingly so, but it's also worth every minute when the characters are happy with how I wrote their story.  Another two people fell madly in love and made the world just a teensy bit better because of it.

For news of my latest releases and such, subscribe to my newsletter, the Pickle Barrel Gazette.  Don't worry, your mailbox won't get overloaded because I don't finish half of them so they never get sent.  But don't tell anyone.