I feel rather like Rip Van Winkle, as if I fell asleep months ago in the blogosphere and had to relearn format. Sheesh. I also have a Wordpress site and its gone through a major makeover in my absence. But here I am. Finally. Trying to sum up my journey in a sound bite or two.

Covid turned our world on its head in March and it flipped again in May with daughter Alison's cancer diagnosis. The big C is bad anytime, but Covid makes it worse. These past six months I've supported her as she underwent emergency surgery and a grueling course of Chemo for colon cancer--stage 3. Her three children, especially two--year-old Charlie, needed a lot of attention (still do). Only a few of us, like her husband and the other grandma, could help with the kids because of their tight covid circle. Our area continues to be a hotspot. But we were amazed by the stream of faithful friends and neighbors who brought meals, ran errands, and did loads of laundry for the family. This generous outpouring made a huge difference, as did the countless prayers. We are eternally grateful. Shortly before Christmas, the oncologist declared Alison's latest scans good. Thank God. She's free from cancer treatment, apart from follow up scans and tests. It's hard to believe this challenging episode is done. It seemed endless. 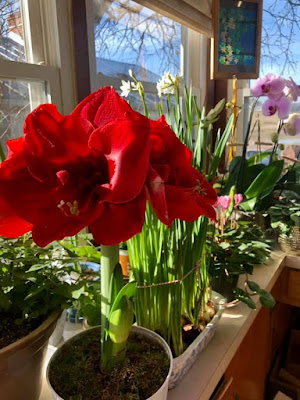 In addition to helping Alison and the kids, I threw myself into the garden. Planting, pruning, digging--all that goes with gardening--lifts my spirts and calms my mind. Every time events threatened to send me up a tree, I ordered a rose for the Memorial Garden. I'd already planted a great many, but the number swelled with such a memorable year. When it got too late for rose planting, I ordered a LOT of bulbs and added tulips, hyacinths, crocus, daffodils, and lilies to the many lying dormant in the ground. When spring comes, they will burst forth with abundant color and fragrances. When the weather grew too frigid to plant bulbs outside I turned to my indoor garden. Geraniums and rosemary brighten the sunspace and I add new amaryllis bulbs each fall. I've been given four orchids, several cyclamen, Christmas cactus, and acquired a variety of succulents. Bringing hyacinths into bloom early is on the agenda and I always grow paperwhites.Gardening, indoors or out, helps keep me sane. Hubby Dennis is putting up a greenhouse outside the sunspace which will give me more room for starting seeds. The dahlias daughter Elise and I dug are overwintering in an unused bedroom and I've ordered a few more flamboyant tubers. And tuberous begonias. *Of course.

Cyclamen in my window garden: 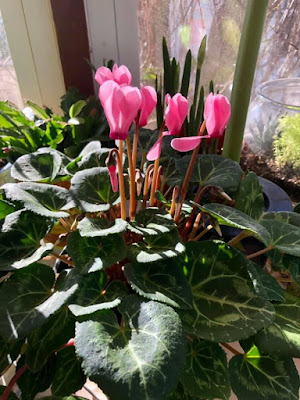 I'm still an author, guess I always will be, but writing has been on the backburner these past months. I didn't have the heart to venture into that consuming world, while holding my breath about Alison. I hope to soon. Maybe I'll finish that time travel I began B. C. Before Covid. Meanwhile, two of my novels are free this week from Sunday through Thursday at Amazon. 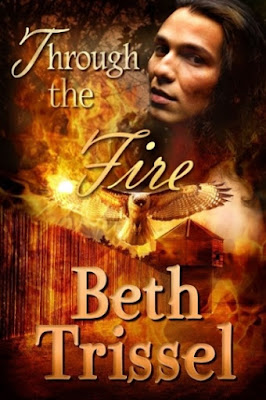 Will love inflame these two natural-born enemies in fiery destruction?

Passions run deep in the raging battle to possess a continent, its wealth and furs. Both the French and English count powerful Indian tribes as their allies.
English lady Rebecca Elliot, having eloped to America with a British captain, finds herself a widow. When she ventures into the colonial frontier with the militia to seek her uncle, she unwittingly enters a dangerous world of rugged mountains, wild animals, and even wilder men. The rules are different here and she doesn't know them, especially those of the savagely handsome warrior who captures her body and her heart.
*** 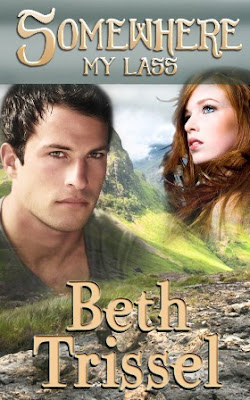 Will Mora and Neil be too late to save a love that began centuries before?

'‘The MacDonald comes’ warns Mora Campbell when Neil MacKenzie finds the young Scotswoman lying unconscious at the top of his stairs after he discovers his murdered housekeeper slumped at the bottom. Mora’s claim that she’s his fiancé from 1602 and was chased to the future by clan chieftain, Red MacDonald, through ‘the door to nowhere’ seems utter nonsense. Neil thinks she’s addled from the blow to her head until his life spirals into chaos and the avenging Highlander shows up wanting blood. Mora knows the Neil of the future is truly her beloved Niall who disappeared from the past, but he must also remember. And fast. 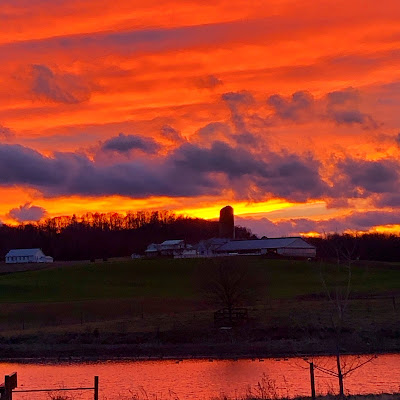 (December Sunset over our farm pond.)
See you next year!
Posted by Beth Trissel at 7:04 AM 11 comments:

WISHING FOR A MERRY LITTLE CHIRISTMAS

This year, there was nothing my husband or I wanted for Christmas. My only request, since we decided to stay in Central Pennsylvania this year and not winter in Florida, was to get a real wreath for the back door so I could smell the pine every time I entered the house from the back door. I’m a farm kid, and real pine scent brings back warm memories.

I think, when we all look back at Christmas next year, we’ll remember how important our lives, our family members’ and friends’ lives, our warm homes and nourishing food, and all those things we took for granted were far more important than any physical gifts in 2020.

So on Christmas Eve, instead of a long post, I leave you with a few lines from “How the Grinch Stole Christmas” by Dr. Seuss. How spot on it is for this Year 2020!

…So he paused. And the Grinch put his hand to his ear.
And he did hear a sound rising over the snow.
It started in low. Then it started to grow.
But the sound wasn't sad! Why, this sound sounded merry!
It couldn't be so! But it WAS merry! VERY!
He stared down at Whoville! The Grinch popped his eyes!
Then he shook! What he saw was a shocking surprise!
Every Who down in Whoville, the tall and the small,
Was singing! Without any presents at all!
He HADN'T stopped Christmas from coming! IT CAME!
Somehow or other, it came just the same!
And the Grinch, with his grinch-feet ice cold in the snow,
Stood puzzling and puzzling: "How could it be so?"
"It came without ribbons! It came without tags!"
"It came without packages, boxes or bags!"
And he puzzled three hours, till his puzzler was sore.
Then the Grinch thought of something he hadn't before!
"Maybe Christmas," he thought, "doesn't come from a store."
"Maybe Christmas...perhaps...means a little bit more!”…
~ * ~
"Have yourself a merry little Christmas…let your heart be light.
From now on, (let’s hope) our troubles will (soon) be out of sight!"

My Musical Christmas Series is a fun, light read that will keep you in the holiday spirit! 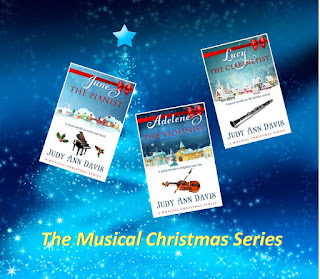 Something for the holidays 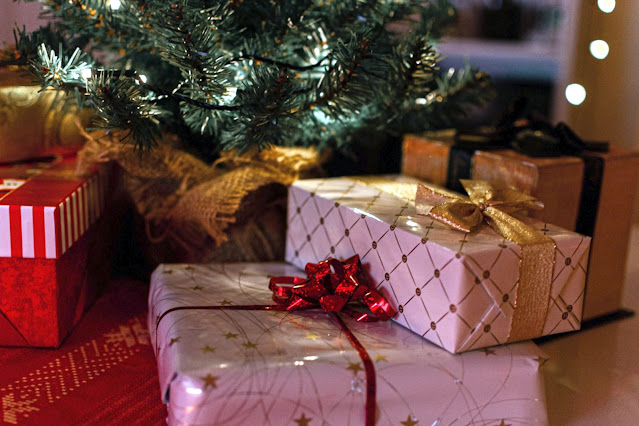 One of the sharing things we like during the holidays is give or exchange gifts. As part of that tradition, I put some of my Christmas oriented eBooks on sale in Amazon. The sale lasts until the New Year. We would do them free but unless books are permafree somewhere else, that isn't possible on Amazon except for limited times, and we wanted this to last until we got to 2021. Some of the books have more emphasis on Christmas and others it's a part of the story.

The poster shows the five books on sale. Four of them are novellas, two historicals (which are books 5 and 8 in the Arizona Dreaming series) and two contemporaries; but this year, we have a fifth, which is a full length novel (Book 2 in Arizona Dreaming). All stand alone but some have secondary characters from earlier books. 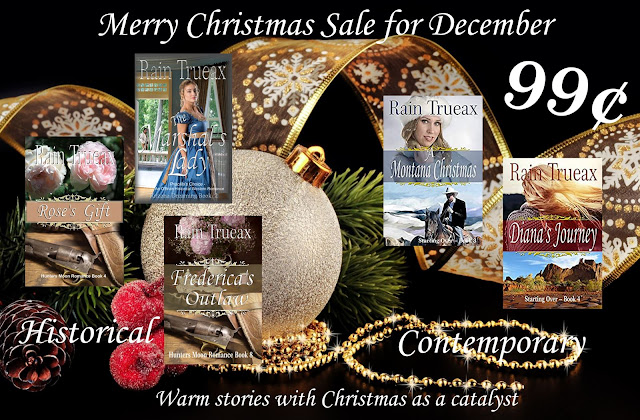 While Christmas is not central to The Marshal's Lady, it is important in the development of relationships. As a father, Marshal Cordell O'Brian, who has been kept from his daughter, is trying to finally establish a connection with 9-year old Grace as she is sent to him in Tucson. Will she ever accept him as her father?

Priscilla Wesley, the woman he is attracted to, but knows it'll never work out, has taken Grace under her wing and now is trying to teach them both about the joys of a holiday neither has really known.

Snippet from The Marshal's Lady, as Cord takes on a new responsibility to the laughter of his deputy.

“You’re doing what?” Rafe asked with a laugh.

“You heard me and don’t bother making jokes.”

“No jokes but come on. Geronimo is supposedly signing a peace treaty soon, but he hasn’t yet. There are always renegade bands just looking for easy pickings.”

“I am not easy pickings.”

“Give me a chance to adjust to this.” Rafe chuckled again and leaned back on two legs of his chair. “You are going out Old Spanish Trail then up in the Rincons to cut a Christmas tree?”

“What? You heathens don’t cut trees?” Cord asked finding an old scarf to wrap around his neck and cover his ears if it got too cold. Where the desert floor wasn’t too bad in December, if he had to go above four thousand feet, there’d likely be snow. As he remembered it, there was a slot canyon where pines grew of the right size. It’s where he’d head, hoping he could avoid going higher.

“When we cut a tree, it’s to build a home. Hell, we even revere flowers as sacred. A tree oughta be more so.” His smile said he took none of it seriously.

“Well it’ll be decorated up real pretty until it gets cut up and burned in a fire. That seems special to me.”

“For what, to laugh? No, I want you to stay here and keep an eye on the town. Sheriff Adams is out of sight again, most likely drunk in the backroom of a bar somewhere or maybe in one of the girls’ rooms. Whatever the case and wherever he is, he’s not answering to anything.”

“No surprise in that. Why doesn’t the damn town get rid of him?”

Cord shrugged as he buttoned his coat. Outside the drizzle was cold. Any direction he went, this wasn’t going to be much fun. Usually when he got stuck with such hunts they were to go after a bad guy. Who’d have figured it’d be to chop down a six or seven foot pine tree.

“All right, I’ll do it, but I’d rather ride into the mountains and let you stay here and look after town,” Rafe protested one last time.

“And have you feel you had damaged some ancestor’s special something? Not a chance.”

“Are they picking up Evans today?”

“Supposedly but that was supposedly yesterday too.”

“I gotta admit I’m glad your girlfriend got Ben off the hook.”

“She’s not my girlfriend, not my friend, and yes, I am too. Judge Emerson was still chuckling as he delivered the orders.”

“The kicker was she’s hiring Ben, which will work fine so long as he doesn’t drink.”

“James’ll keep an eye on him. He likes James. He likes Miss Wesley even more.”

“Hopefully it’ll work out for them all.” He had a few reservations mostly connected to his jaw, which had almost gone back to normal, but still hurt when he bit down wrong on something.

“Well watch out up there. See you tonight.”

Links in Amazon for eReaders:

And then come the contemporary novellas, both with Christmas rather prominent.

In A Montana Christmas, the heroine (from an earlier full length novel, From Here to There, has it mind that a ranch Christmas is a time to heal her husband's family rifts. Or will it only create more pressure?-- https://www.amazon.com/Montana-Christmas-Rain-Trueax-ebook/dp/B00AOU0IQ2

In Diana's Journey, a retired teacher is facing a change in her life. With so many lost memories, Christmas is the last time she wants to think about. Can it prove healing for her in a small southern Utah community? -- https://www.amazon.com/dp/B01M5IA26Y