Not One Peep by Bea Tifton

It’s an issue that’s dividing the country. People feel so strongly one way or another. Families are being advised to avoid discussions about it at Easter dinner. I try to avoid controversy on my blog posts, but I  have to clear the air and take a stand. I simply must ask, “To Peep or not to Peep?”

Ah, Peeps. Those cute little marshmallow, sugary treats that pop out of the stores every spring in their pretty pastel colors and their cute little bunny or chick shapes. People either love them or hate them. But where did they come from?

In 1910, Sam Born emigrated from Russia and landed in New York City, where he opened a chocolate shop. He named his company Just Born and did very well, gradually acquiring several more candy businesses in the 20’s and 30’s.

The Rodda Candy Company made candy out of the marshmallow plant and candy shaped like religious icons for Easter, among other things. The Rodda Family isn’t sure, but they think that the first marshmallow chicks were made as a special order in the 1940s, more for decorations than dessert. It took 27 hours to make one tray of Peeps from marshmallow, eggs whites, and sugar.  In 1953, Just Born purchased the Rodda Candy Company. Bob Born, Sam’s son, invented a machine that could produce 30 Peeps in six minutes. In 2014, this “Depositor” was replaced with a brand new updated machine. 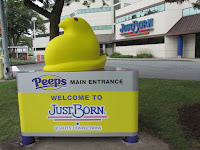 Today, 700 million Peeps are made each year. They are the most popular non chocolate Easter candy. People make clever dioramas to compete in contests throughout the country, Peeps are featured in many social media memes, and there are Peeps eating contests. In 2019 Matt Stonie set the world record for eating 255 Peeps in five minutes. He’s still in a sugar coma to this day. (Okay, I made that last sentence up.)

Peeps gourmands have several ways to eat them. Most people admit they eat the heads first. Many people like them more after they’ve been exposed to the air and dried out a bit. Some people toast them. One woman said she makes S’mores for her daycare class with Peeps.

Me? I think they’re cute. I love the Easter colors, and I like the marshmallow chicks shapes the best. I’ve attended Peeps diorama viewings at my local library and considered making one myself. But I just don’t like to eat them. Still, spring wouldn’t be the same without seeing them, lining the “Seasonal” aisles of the store, just waiting to be plucked. 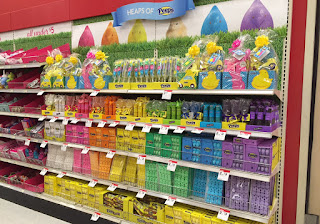