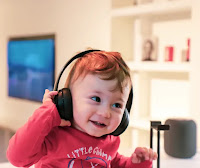 Several weeks ago, I heard much buzz about a song relating the adventures of a juvenile marine predator and his family that was sweeping the toddler world. With its catchy tune and repetitious lyrics, it had become the darling of the diaper set and the bane of  parents. Curious, I looked the song “Baby Shark” up on YouTube and watched a video. And proceeded to reply it in my head over and over again. For two days. Gah! I had been infected by an earworm.

But what exactly is an ear worm, and what causes it? More importantly, what is the cure?

An ear worm is when a song gets stuck in one’s head. The psychological name for it is “Involuntary Musical Imagery" or "Stuck-Song Syndrome." It can be caused by repeated exposure to a song, which was the case for my earworm, or by memory triggers. A breakup song, for example, may reappear in times of sadness, or a particular song in times of happiness.

Getting rid of it can be simple. One British study suggested that if someone chewed gum immediately after hearing one of those catchable tunes, an earworm is less likely to appear. Seems we can’t store memories and chew energetically at the same time. Hmmm. I also have difficulty walking and chewing gum at the same time.  The other suggestion I found is what eventually helped me. I simply started singing another song until the earworm disappeared.

If you choose the latter remedy, just make sure you don’t create a new earworm.