REVIEW OF ONE TRUE HEART BY JODI THOMAS

As she did in her historical romance about the founding of Harmony, Jodi Thomas takes three couples and intertwines them in this latest contemporary novel set in Harmony. In ONE TRUE HEART, six characters seemingly with no similarities become partners in the quest for a criminal and find love as well.

Former Captain Millicent McAllen has returned to Harmony to heal from her war wounds, a shattered leg. Harmony is the last place she felt secure and happy. Unfortunately, that was when she was ten years old. Even though my situation is less traumatic than war, I've undergone several ankle surgeries and could identify with Millicent. 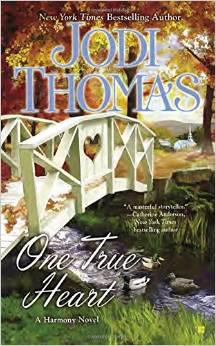 Drew Cunningham left the horrors of a mass school shooting in which he was a hero to retreat into life in a cabin and teaching one class at a local college. He appears to be a shy academic, supposedly writing a book on local history. He wants no attention and avoids crowds. Drew is the sort of man who reminds me of my husband--he wants no glory but he steps up and does the honorable thing.

Kare Cunningham is a brilliant woman who masquerades as a loopy fortuneteller. She found her half-brother Drew to reward herself for her life with isolating but cold parents. But she has another mission. I adored this free-spirit whose loving heart manages to bring out the best in everyone.

Johnny Wheeler is more embarrassed than heartbroken when he catches his wife with her friend Max. He farms the land several generations of his family have farmed before him. When his ex-wife told him he was boring, he couldn’t deny the label. Johnny is my favorite of these characters. He is a sweet, hardworking man whose heart needs solace.

Beau Yates has made a success of his life in spite of his parents. He’s returned to Harmony to try to make peace with his dying father. Something is holding him in town, though. Here is where the songs come to him and where at seventeen he met the girl whose memory still inspires his music.

Ashley Lark Powers has no real complaints--except she didn't want to go into banking. Her daddy owns three banks and her parents are the best. But she can’t forget the young singer who calls her Trouble and sings songs she knows are for her.

These six people make three unforgettable couples as they join forces to defeat a foe of the United States. On the way, they find love more powerful than they had dreamed.

Ms Thomas vivid writing evokes a mental image. I believe I could walk through the town of Harmony and find my way from Winter's Inn to Hatcher's book store to the Blue Moon cafe and to all the other places she's named in this series. The Mathesons and McAllens and the other residents of Harmony are real people in my mind. I love every Jodi Thomas novel I have ever read. Her masterful storytelling keeps the reader engaged until the last word. Don’t miss this one. I give it 5 stars.