Hashtag: a search string preceded by a #. (Example: #amreading or #mariners)

All authors need a hashtag, we’re told. I admit, I’m a late comer to this party, but I finally caved.

And now? Well, I have to admit, I find them useful. I use the same ones on Instagram, Twitter, and Facebook. Some of my readers use my hashtags, too, and it’s always exciting to see one of those posts—which, by the way, I wouldn’t have seen if it weren’t for the amazing search abilities that hashtags afford. You can click on any hashtag and see all the other posts with that same hashtag. Awesome! 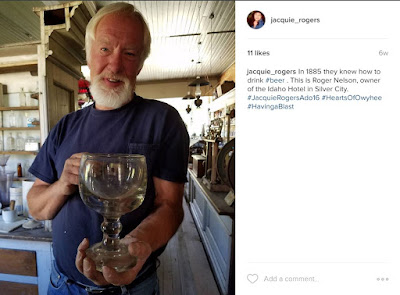 The thing of it is, if they’d used the term 'searchstring' instead of a hashtag, I’d have used them from the very beginning, because searching, I understand. Hashing, well, that’s done in the kitchen, so I had a total disconnect there. But now I’ve got it. Finally.

Let’s wade right in and talk about the different types. And remember, they’re not case sensitive, so the caps are just for ease of reading.

Branding Hashtags
These are for identifying you or your product. I have three:

All posts that have to do with your professional life (meaning not the cat videos) should have your author name hashtag on them. I admit that I only do this on Twitter and Instagram. Facebook’s hashtag search isn’t nearly as powerful. Also, Facebook didn’t utilize hashtags in the beginning, so I didn’t get used to using them.

You can have more than one branding hashtag on a status update. Example tweet:


Of course, on Facebook you’re better off with a more verbose status update:

Cole has to choose whether to tell the truth and hang, or lie and end up married to the mayor’s daughter. MUCH ADO ABOUT MARSHALS (Hearts of Owyhee #2). “This book made me laugh out loud a lot, not only because of the dialogue but because of the characterization... If you like to close a book with a smile on your face, this is the book for you.” Masquerade Crew review http://amzn.com/B00RW84YRS #HeartsOfOwyhee #JacquieRogers


This is useful in Facebook because if you’re looking for a status update you posted a while back, you can click on the hashtag and find it. You can also use it to track contest comments and that sort of thing. Which we'll talk about later. 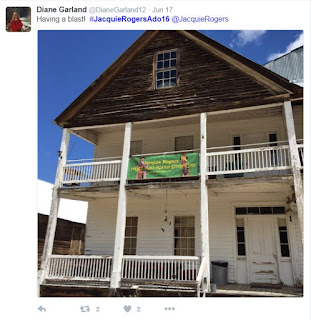 Event Hashtags
I had an event in Silver City, Idaho, in June and the hashtag was:
#JacquieRogersAdo2016

Yes, that’s too long. No, we couldn’t figure out a better one. So there it is. Why is this important? Because when people who attended the event posted photos or raves (yes, because we all had a blast!), I could “like” or “heart” or “favorite” it. No matter where it was posted, the hashtag allowed me to find it. 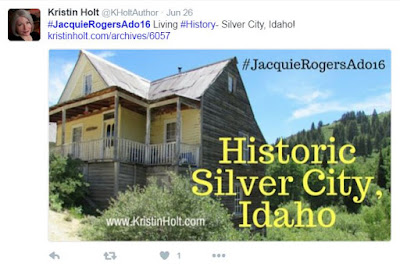 This gets into fuzzy territory because my contest hashtag and morphed into a branding hashtag. Not sure how that happened. But originally, it was for the Where’s Honey contest:
#WheresHoney 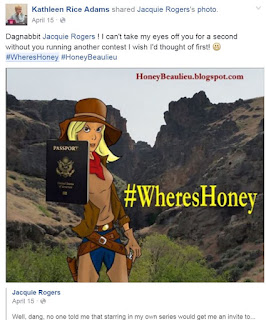 Diane Garland took Honey to London. We posted a bunch of photos, all with #WheresHoney emblazoned in bright yellow.

Commenters guessed where they thought Honey actually was, and at the end of a quite a long time, maybe a month, we drew a winner.  How?  By searching #WheresHoney.  It's the easiest way to find who all posted where, because in this contest, the posts could be on Facebook, Instagram, Twitter, or LinkedIn.  Tracking that simply isn't possible without hashtags.

And everywhere Diane or I go, so does Honey. She just got back from Germany and Sweden (unfortunately, that wasn’t with me). Where will she go next? Well, while she was in Germany, she was also in New Jersey with one of my readers, and in Connecticut with another. 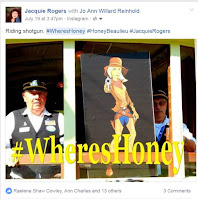 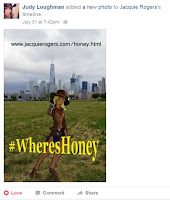 All the while Honey was gallivanting around, I was pounding away at the keyboard on Honey’s second book, Sidetracked in Silver City.

There’s two other types of hashtags

Comment Hashtags
These usually express humor or an opinion. Yes, you can still search for them but since they’re made up on the fly, you probably won’t find any others. But they’re fun. 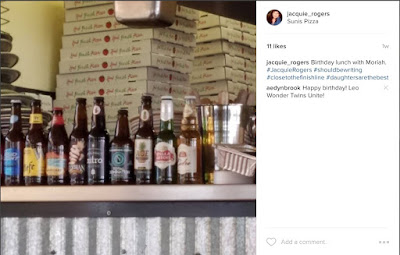 Popular Hashtags
I used #liquor and got a ton of hits on Instagram. Apparently there are a lot of drinkers there. Ha! This photo didn’t get a lot of “hearts” but I did get a boatload of followers. Using popular hashtags can attract a lot of people to your photo. #instagramcats will get you a bunch, as will #pie or #recipe. 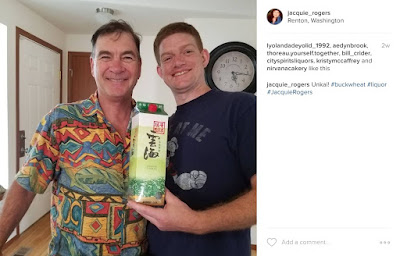 It’s worth your while to extract an element of your book and use that for a hashtag. I haven’t done this yet but I’m told I should. So for Honey Beaulieu, I could use #racingmule, #donkey, #longears, #ghost, #oldwest, #poker...these are all relatively popular hashtags. So I’m thinking about it.


So that’s the hashtag (searchstring) lesson for the day—in other words, it’s all I know. If you get the hang of using them, they’re indispensable.

Romancing The West | Pickle Barrel Bar and Books
Posted by Jacquie Rogers at 3:50 AM