What Makes a Hero by @JoanReeves

As a romance author, I think about heroes a lot because each romance novel calls for a hero.

What Is a Hero?

Is he the guy in the picture to the left? He's got looks and muscles. Does that make him a hero? People claim football heroes, rock star heroes, and generally use the term hero to mean anyone they admire. Does extreme success and likability make someone a hero?

No. Popularity, personality, and skill in a demanding field just makes an admirable person. Maybe it makes someone a potential hero, but it takes more than a pretty face, good body, and charm to be a hero--in a romance novel or in real life.

In my humble opinion, a real hero--male or female--gives unselfishly to help others...often, to protect those in harm's way. Most people don't think about the heroes in their own family, but I think you should look no farther than your own family to find heroes. Think of the fathers--and mothers--who work hard to give their children a better life. They're heroes. Far better to idolize them than some hip hop artist or bad boy football star.

Real heroes give. They sacrifice--often for strangers. Sometimes that sacrifice is the ultimate one that claims the hero's life.

Real heroes? Try Fire Fighters and Police Officers who put their lives on the line every day of the week. They and other first responders are heroes.

Doctors and Nurses who volunteer for Doctors Without Borders are real heroes. Many doctors and nurses and other medical staff, from every field, volunteer in free clinics and in countries where villagers never see a doctor. Two of my doctors do this.

Dentists do the same, providing care for the poorest of people who have little access to quality care. My dentist does this every year.

Volunteers who who work in poor villages and countries to bring people the basic necessities that we take for granted like clean water--they're heroes. Every year people volunteer to dig wells in places where the nearest water source might be a creek or a river miles away. The number of places in the world that lack the things we take for granted like clean water, septic systems, etc. is shocking. 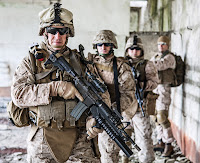 Soldiers who protect and serve that we might have life, liberty, and the pursuit of happiness are heroes. National cemeteries are full of these heroes who have given their lives in every war and conflict.

If you read romance, you know how popular the military hero and law enforcement heroes are. I had a former soldier in Old Enough to Know Better, April Fool Bride, and Heat Lightning.

This desire to protect and serve is why so many romance heroes are soldiers and cops. 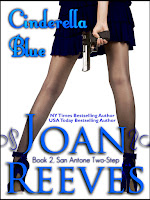 In my romantic comedy, Cinderella Blue, I have a cop hero, but I did a bit of a flip-flop with what the reader might expect. In most stories involving a cop hero, the cop avoids commitment at all costs.

In Cinderella Blue, Detective Bruce Benton, first introduced in Nobody’s Cinderella, is commitment phobic, but so is Detective Andrea Luft, his new partner who he realizes is perfect for him. He's the first in their growing relationship to want commitment.

I had fun solving Andie’s problems stemming from her emotional baggage. Here's a short excerpt to show you these two cops in action.

Heat shimmered in waves above the pavement. Across the street, Bruce Benton saw a cluster of shops that created one-stop shopping for women looking to drop a few grand on a pretentious wedding. He crossed the street and headed to the flower shop. As he passed the glass storefront of a photographer’s studio, he saw a woman inside. A nano second later, he stopped abruptly. The heat must be frying his brain. He retraced his steps, casually glancing in again. The woman wore a wedding dress, but instead of a bridal bouquet, she held a handgun.

Bruce drew his Glock and eased the door open. A bell over the door jingled. He cringed as he slipped inside. Maybe she was deaf. The woman whirled. Nope. Not deaf. She held her gun in the same shooter’s stance as he. “Take it easy, lady. Maybe the photographer took some lousy pictures of you. That’s no reason to shoot him.” 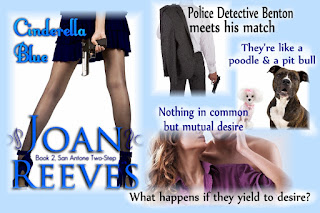 Everything happened at once. A man rushed from behind her, slammed into her, and sent her flying into Bruce. They went down in a tangle of arms, legs, and miles of white satin. She came up snarling.
Bruce leaped up, gun in hand. “Freeze!”

He stepped toward her. With a snarl, she whirled. He saw a white blur and felt agony in his hand. A roundhouse kick to his solar plexus cut off his gasp of pain. He hit the floor. Wheezing, he tried to rise, but the blonde stood over him with her gun–and his–pointed at him.

Bruce groaned. Not from pain so much as humiliation. Crap. He’d never live this down.

What kind of a hero do you like best in romance novels? Do they reflect the qualities you admire in your real life heroes? 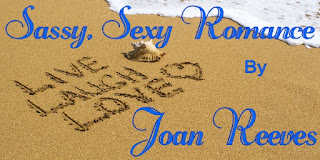