Book Covers Then and Now by Suzanne Rossi

By the time you read this the house will have closed and I'll be on my way to our new home in Germantown, Tennessee. It's been a very busy month. A few days ago I decided to go through my incredibly large number of books and weed out those I no longer needed, especially the "how to" books. Many were bought when I first started writing. I used them to learn, but now is the time to let go.

I was being ruthless when I came across a unique little book I'd forgotten I had. It's called The Art of Romance, and is a compilation of cover art from Mills and Boon and later, Harlequin. The book was published in 1999 as a tribute to Harlequin's 50th anniversary.

Cover art is the first thing that leads a reader to pick up that particular book before flipping it over to check out the back cover blurb. Like writing, the art work has also changed with the times. I thought I'd take this opportunity to share some of them with you.

The first thing I noticed about The Girl Who Saved His Honor was the fact it was written by a man. The publication date is listed as 1914, so maybe the author was a woman using a pen name. I'm not sure about the social mores of that time, but the covers depicted in the book prior to 1930 have either male authors or authors who used initials instead of a name. Perhaps it wasn't considered proper for a woman in those days to write romance. Whatever, I found it interesting. 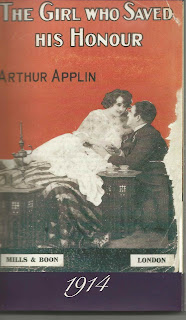 This cover dates back to 1937. We can see the evolution of style. No Other Man is written by a woman and the art has that Art Deco flair. In those days, Jean Harlow was the goddess of Hollywood. She wore slinky, satiny dresses and nothing underneath. Definitely, a woman ahead of her time. It was a time of elegance in clothing. Remember the 1930's movies with Fred Astaire and Ginger Rogers? They dressed in formal wear to eat dinner! And when Fred danced, he always seemed to wear a tuxedo. 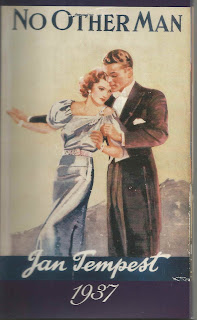 By the 1960s, heroines had careers, albeit not in male dominated occupations. They were secretaries, nurses, and teachers. This cover is from 1964. Harlequin was now the premier romance publisher in the world. Many of those early books in this era had settings in Britain, Australia, New Zealand, and South Africa. At the same time medical romances were gaining steam, yet for some reason, they were almost always set in Holland. I clearing recall reading this author when I first discovered Harlequin. 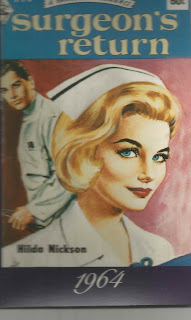 The 1970s introduced new Harlequin lines. The heroines were trying to break through that glass ceiling and the story lines took on a much higher sexual tension than in earlier years. The 70s and 80s also introduced the uber-alpha male hero. He was strong, authoritative, and hid his real feelings until the final chapter. However, it was the heroine who softened and brought him to his knees in the end. This cover from 1970 is one of the first from the new line of Harlequin Presents. I think I may have read it since I loved Anne Mather. 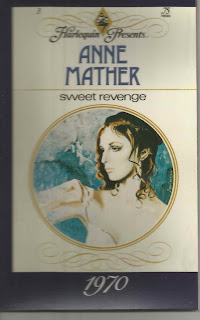 When the 90s rolled around, the romance world had taken huge strides in addressing social issues. Men were not afraid to show their softer sides, and women now held jobs in the in the board room. The sexual tension had ratcheted up considerably, and the deed was often consummated between the hero and heroine--occasionally resulting in a baby. New Harlequin lines like Intimate Moments, Temptation, and Blaze had been introduced as was the suspense line, Intrigue. The cover art had also taken giant steps forward. A more realistic, life-like depiction of characters was presented. And as seen below, cowboys were as popular in 1997 as they are today. 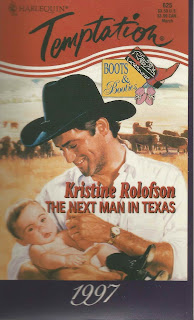 I decided to keep, The Art of Romance. Those covers are a stroll down so many memory lanes--writing, romance, clothing styles, and social outlooks. I just can't give it up.

Hope you all got a kick out of this blog entry. See you next month.