Critters Liven Up the Place! 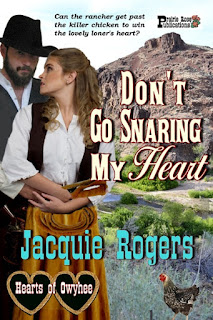 This is my latest release, Don't Go Snaring My Heart. If you get past the handsome hero and beautiful heroine, you'll see a chicken in the lower right corner. Yes, a chicken. It's not Jethro the Killer Rooster--actually one of his harem wandered onto the cover. Don't worry, Jethro's on the alert and he won't let anything happen to her.

Then there's a goat named Lady Jane Grey. She adores her mistress Betsy so when Dex, the hero, arrives on scene (upside down), Lady JG gives him a little butt, er, love pat, just to let him know she's got Betsy's back.

Even when the deputy comes out to help Dex save the day, guess who's riding with him? Yep, Deputy Duke from Much Ado About Miners.  So besides a lawdog cat and a killer rooster and his harem, there are more goats, including kids who bounce all over the place, and canine-type dogs, too. And that's just in a single read. So my question is this, do you enjoy animals in the stories you read? 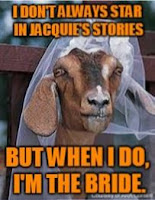 People have asked me why animals horn their way into most of my books. I'm not sure. I suspect it's because I grew up on a farm and animals are part of farm life. I had a cow named Cleopatra and a dog named Pinkie. Actually, I had dozens of animals, including an evil Shetland Pony named Smokey and an actual real horse, Penelope.  I'm a country girl, so in my view, animals have their place in our world and that's just the way of it.

Then there's the two-legged critters.  Oh, my.  The man in the original cover didn't suit us so Livia Reasoner (cover designer) swapped him out for my nephew, who's also on Much Ado About Mustangs.  Same costume, even.  But we use the same cover models all the time, so I'm not concerned about that.

And, it's not a critter, but check out that background photo by Chelle Gluch.  Awesome!  Because guess what?  It's the exact location of Betsy's claim and home.  Exact.  How many times has that ever happened?

About Don't Go Snaring My Heart 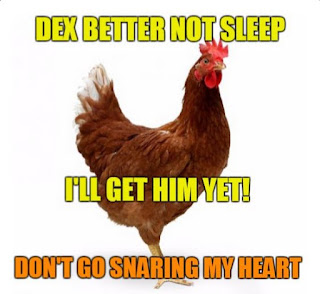 Alone in the high-mountain desert, self-sufficient Betsy Lynch is determined to eke out a living selling goat cheese while she fulfills her father’s dream to find a rich silver lode. Claim jumpers threaten to take everything she holds dear, so Betsy uses a bullwhip, her wiles, traps, goats, and an attack rooster to defend her land.

Rancher Dex Madsen needs to feed his hungry crew. He tracks a herd of pronghorn and shoots one, then steps into Betsy's snare and is jerked upside down. The goats and rooster attack before Betsy cuts him down, and soon he's neck deep in her fight to protect the claim. But can he get past that killer chicken to claim her heart?

Return to southwest Idaho in the 1880s in Jacquie Rogers' acclaimed Hearts of Owyhee series.

Posted by Jacquie Rogers at 6:27 AM