It's fairly common knowledge in the writing world that characterization is the most important part of a story, especially if you write romances where a relationship between the hero and heroine is the plot.

In the stories I write, I mostly fit a story around a character rather than fitting a character into a story.  Sometimes a character of a particular stripe calls for a certain story.(Does this make sense?)

So naming a character or characters is of the utmost importance. Sometimes I start with one name, but by the time I'm a quarter of the way into the story, I've switched to another name. I'm always on the lookout for the name that "fits" my guy or gal.

I take into consideration ancestry, ethnic background if it applies. For sure, that information affects a hero or heroine's last name. I want his or her last name to hint of family's history. In THE LOVE OF A LAWMAN, the heroine's parents were French Canadian, so I used the French spelling of her name, Isabelle. ..... In SWEET RETURN, the hero is part Comanche and distantly related to Quannah Parker, so it seemed fitting to give him the last name of Parker.


In the book I'm writing now, THE HORSEMAN,  I have a particular challenge in that the hero is part Hispanic, but his last name is Rattigan. Confusing. I would change it, but the book is #3 of a trilogy and his name is already well established in the previous 2 books. So I still have to figure out how to deal with that situation.

Here's the cover, by the way. Designed by Kim Killion. What do you think? 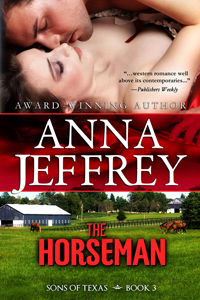 All of my heroes are tall and handsome and alpha. I've named them all sorts of names, but the ones I like most are names that sound strong, pronounced with a hard C or K or T. For example, Luke, Cable, Tack, Jake, Parker, etc,.....You get the idea.

For heroines, I like feminine-sounding names. My heroines are quietly strong. They are alpha women, but also beautiful and feminine. Think Scarlett O'Hara who was tougher than a boiled owl, but an incredibly feminine woman. For heroines, I like soft-sounding names, i.e., Amanda, Dahlia, Joanna, Isabelle. ..... In the Dixie Cash book I'm working on, I've name the heroine after someone I know. This is the first time I've ever done that.

To say that I spend a lot of times on naming by story people is an understatement. I'm always open to suggestions.

Email ThisBlogThis!Share to TwitterShare to FacebookShare to Pinterest
Labels: Amazon, Amazon Kindle, Anna Jeffrey, award-winning contemporary romance, cowboys, steamy romance, Texas, The Cattleman, THE HORSEMAN, The Love of a Lawman, The Sons of Texas, The Tycoon