REVIEW OF MICHELLE McCARTY'S BEYOND THE PALE

By Mary A. Adair

BEYOND THE PALE by Michelle McCarty

BEYOND THE PALE is an emotional roller-coaster ride. The story opens with a funeral. As Abbie’s mother is laid to rest, the reader is introduced to Abbie’s family, and what a family it is. Abbie grew up without affection from her mother. Growing up, her father was her only link to normality and parental love. When he died in an auto accident, her horrid mother cruelly and untruthfully blamed the fatal accident on Abbie. 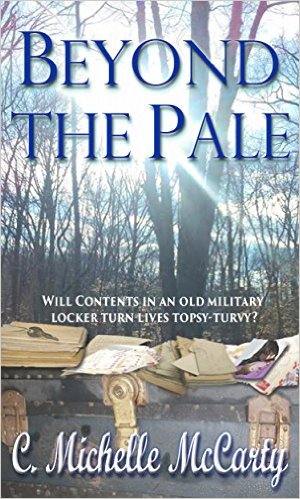 If Abbie’s childhood years had been hard, her teen years were even more so. To Abbie’s credit, she has created a life for her son and herself surrounded by a wildly diverse group of people. She finds structure and security within her “other” family who will support her in the trial ahead in a way that will cheer your heart.

Now she has returned to attend her mother’s funeral in the town her mother forced her to walk away from while still in her teens. All she wants is the locker filled with special mementoes her father had promised her so many years ago. After her father’s death, Abbie’s mother had refused to give her the locker. It does not take long for Abbie to realize her evil sister-in-law will do everything in her power to keep the locker from her as well. Abbie has no doubt the evil witch believes it to contain something of great monetary value.

This story takes place over a short period but it is packed with emotion and discovery. Abbie is a strong, sensitive woman with reason to have a chip on her shoulder the size of Texas. She speaks her mind and takes no guff from anyone and this made me cheer her on while her inner strength and tenderness won her a place on my “favorite characters” list.

Ms McCarthy is a master story teller. It is hard to imagine this is just her second book. And…You will not be able to figure out the surprise ending until the very end. Believe me, you will LOVE it!