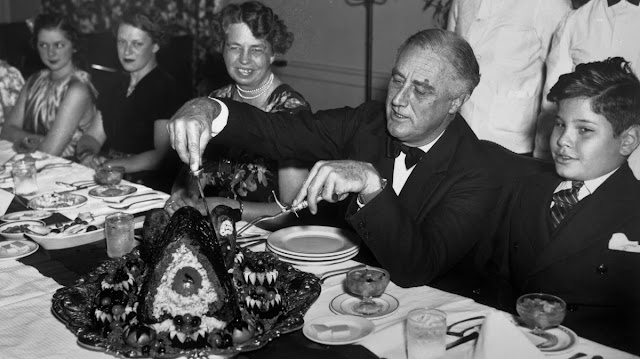 Since my book is set in 1942- here is another little tidbit of information I found in my research:

Have you ever wondered why we have Thanksgiving on the fourth Thursday of November?

In 1789, President Washington declared Thursday, November 26, as a "Day of Publick Thanksgivin," according to the National Archives.

For the next 70 years, Thanksgiving was held on various dates and months, as announced by the president in office.

In 1863, President Lincoln made a Thanksgiving proclamation setting the last Thursday of November as standard.

Seventy years later, in 1933, November had five Thursdays. Because of this, the Downtown Association of Los Angeles asked President Roosevelt to push back Thanksgiving by a week to create a longer time for commercial sales. The President denied the request and everyone had Thanksgiving on the last Thursday as in previous years.

Roosevelt, however, was president for a long time, so long that another five-Thursday November rolled around in 1939. Once again, business leaders asked if the date for the holiday could change to a week earlier to give people more time to shop for Christmas. This time Roosevelt agreed to do it. This date change angered people as they felt the President was catering to large retailers so they could make more money.

A few state governors decided they would continue to have Thanksgiving on the last Thursday of the month, as usual. For two years, some people ended up celebrating Thanksgiving a week earlier or later than others.

Fortunately for my character, Emma, she loves Thanksgiving, and they celebrated both days.