Country Living, Corn-Picking Time, And a Taste Of City Life 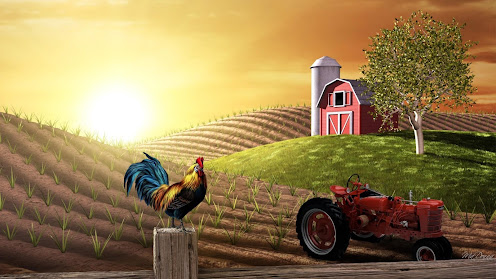 When you're a child from a large family and live on a farm, every season has its unique chores. October meant corn harvest time for us. The nights became cool and crisp, making sleep near an open window feel like a piece of heaven after the humid summer nights. 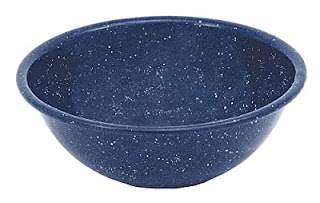 After the old rooster crowed at the crack of dawn, Mama would rise, start a fire in the wood stove, then start on breakfast. The delicious aromas from the kitchen pulled us kids out of bed and to the table.
Every morning Mama mixed flour, lard and milk in a large granite-wear bowl. She would form a well in the middle of the flour, fill it with a little milk and lard, then gradually pull flour from the sides of the bowl into the mixture until it was thick enough to roll out on a board. 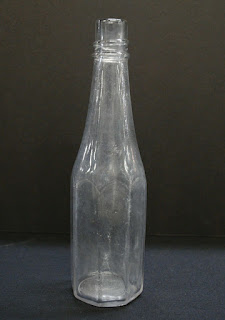 She had her own unique rolling pin—a round, floured ketchup bottle. After she'd cut out the biscuits with a metal drinking cup, she placed each biscuit in the white 9 X 12 enamel pan, plus a large iron skillet. If any biscuits were left after supper, the dogs gulped them down.

It took a lot to feed our brood. When Mama added scrambled eggs from our hen house and poured thick milk gravy over our cat-head biscuits, it eased the news of...

“Y'all count on picking corn when you get in from school. It's ready.” The words didn't sound half as bad. 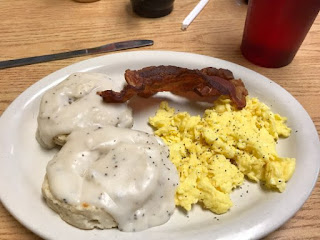 When we got home, my brother Ralph, fueled up the old Farm-all tractor then hitched the two-wheel trailer to it.

When that was done, he inserted the hand crank and yanked until the old tractor puffed smoke from its stack like a locomotive. 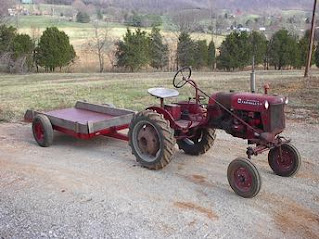 We kids tugged on work gloves before climbing up on the trailer for a jostling ride toward the field. Once we reached the cornfield, we hopped off and began yanking corn from the dried stalks. We worked until it was too dark to see, or until the the trailer spilled over. Whichever came first. 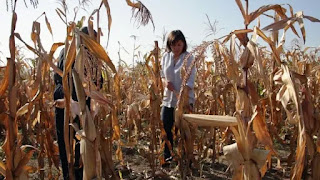 If it was a weeknight, Daddy and Mama unloaded the trailer the next day while we attended school. We'd come in that afternoon, eat a quick supper and start picking again. It took several days and the same number of trailer loads, to pick the three cornfields clean. 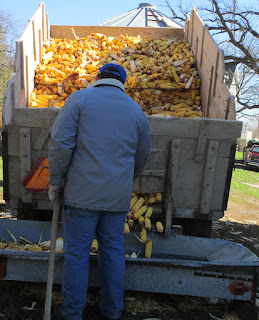 When the last load was piled into the corn crib, we knew the chickens would have enough feed to last until next year's harvest. 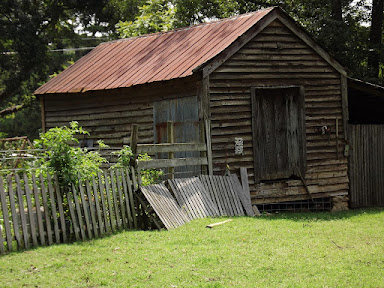 Every morning before school, Jewell (my sister) and I shelled several ears to toss to the chickens. I remember how we looked for the driest ears with shriveled corn and shelled it first. Because the ears that were not yet shriveled were hard to shell and rough on the hands. 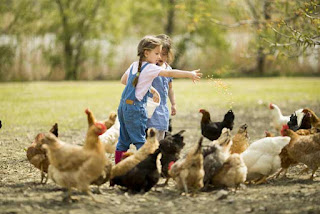 Being raised on a farm meant everyone had to do his or her part to keep it running. I remember thinking, “When I grow up, I'll move to the city so I won't have to work this hard.”

But one week as a teen spent with city cousins in Jackson, Tennessee, changed my mind.

My sister and I had a blast for six days. We went to a roller rink on Saturday night, and walked a few blocks to Mrs. Sullivan's Pecan Pie factory, where you could go on Tuesdays and purchase a paper bag of ten slightly smashed, personal-sized pecan pies for a quarter. Still, city life had a downside. 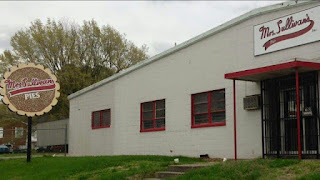 The downside was our cousins' house sat at an intersection on a very busy street. I'm a light sleeper. Screeching brakes, loud trucks, honking horns, and sirens kept me awake every night as they pulled up to the stoplight. After 6 nights of the horrible racket, my mind was screaming for the peace and quiet of the country. The hoot of a nigh owl, croak of tree frogs and the chirp of katydids.

What about you? Do you prefer the country or the city? 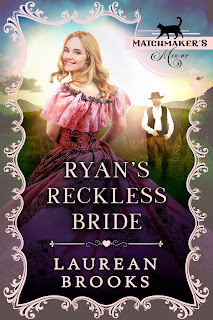 He wanted a sedate, mature woman who could cook and care for his young daughter. She expected an exciting cowboy who thrived on travel and adventure.

Both were in for a surprise.