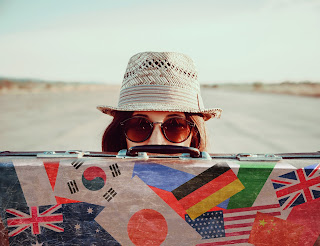 I hate to be trite, but there really is no place like home. At the end of this post, you'll find the musical soundtrack to our vacation, along with the YouTube link so you can listen to what we listened to as we drove.

After taking a Texas Road Trip vacation, and driving all the way from Houston to Colorado, I was delighted at the prospect of sleeping in my own bed last night.

From Texas to Colorado

Okay, we truly are road warriors. Most people in Texas are the same because Texas is a big state.

Texas has some beautiful architecture, and it's shown in the county courthouses and old churches. Of course, it makes the trip longer every time I say, "Stop. I want a picture of that." 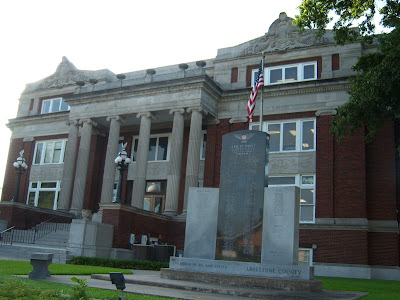 The Hill County Courthouse takes up a square block. Many of the Texas county courthouses do.

The monument in front of the courthouse memorializes those who fought the World War.

When it was erected, there had been only one World War.

Another favorite subject for my camera lens is the water tower. I've got dozens of pictures of water towers from the one painted like a watermelon in Luling, Texas, to the rusty old ones emblazoned with "Seniors...of whatever year."

I made notes about every town we went through because these small towns with their oddities will find their way into my books. Oddities like The Drunken Pig bar, the ranch names and brand symbol on the gateway cross bars, the huge wind farms throughout the sparsely populated areas of Texas, and Rest Areas that are also labeled tornado shelters. 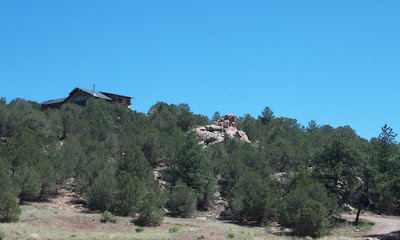 Texas to New Mexico to Colorado

Our destination was my younger brother's home in Colorado. That's it on the left, peeking above the trees on his property.

His home is at an elevation of nearly 8,700 feet. From the road, there are, I think, 5 switchbacks to get up to the house.

In case you don't know, a switchback is usually a 180 degree bend in a road leading up the side of a mountain. At a couple of the switchbacks there were huge piles of boulders, with each one taller than a person. 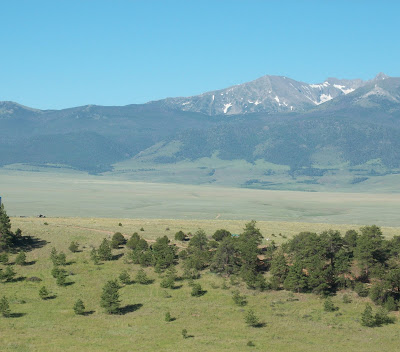 You can stand on his front deck and look across the valley to the snow-covered rugged peaks of the Sangre de Cristo Mountains, 14 miles away.

The Sangre de Cristo is the southern range of the Rocky Mountains. The peaks—most of them 13,000 to 14,000+ in elevation—all have names, and all the locals can point to each peak and tell you the name.

My brother called me a couple of weeks before we left and said he was standing on his deck and watching it snow in the mountains.

We spent the week with him, driving through the mountains and valleys, and I took pictures.

While he drove us to Bishop's Castle or to various other sites like Good Hope Gulch, my imagination was busy playing "what if."

What if a woman found herself kidnapped and hidden away in an isolated cabin in the mountains? What if she escaped? What would she encounter if she tried to make her way down a mountain? Would it even be possible? 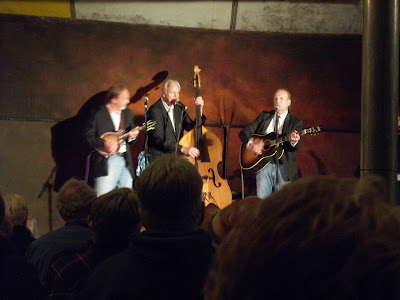 The grand finale of our trip was the High Mountain Hay Fever Bluegrass Festival.

Billed as "one of America's premier bluegrass events in the heart of Colorado's Wet Mountain Valley," it's held every year at the Bluff and Summit Park in Westcliffe, Colorado.

Oh my goodness. That was so much fun. If you're like me and love jsut about every genre of music, you should go to this Bluegrass Festival.

I discovered musical groups that were totally awesome such as Savage Hearts, a trio of women, and Jim Gaudet and the Railroad Boys, shown above. Wow. Original music...amazing instrumentation...awesome vocals. Seriously. Wow. 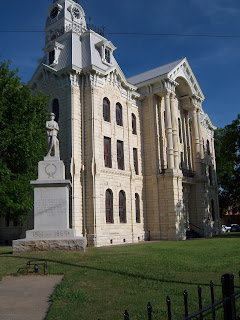 Of course as a music lover, I put together a soundtrack for our Texas Road Trip. I'm sharing it here with the YouTube link so you can take a listen.

Amarillo by Morning by George Strait

Waltz Across Texas by Willie Nelson

If You're Gonna Play in Texas by Alabama

Does Fort Worth Ever Cross Your Mind by George Strait

Texas When I Die by Tanya Tucker 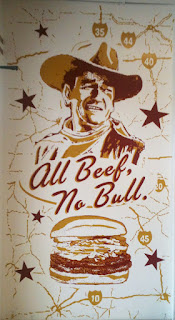 All My Ex's Live in Texas by George Strait

My Texas by Josh Abbott Band

Miles and Miles of Texas by Asleep at the Wheel

I Can't See Texas from Here by George Strait

Blame It On Texas by Mark Chestnutt 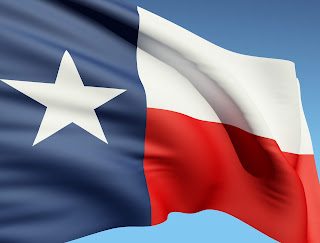 This is Where the Cowboy Rides Away by George Strait

Bob Wills Is Still the King by Waylon Jennings

Mammas, Don't Let Your Babies Grow Up to Be Cowboys by Waylon and Willie

If It Wasn't for Texas by George Strait

Write This Down by George Strait

The Yellow Rose of Texas by Michael Martin Murphey 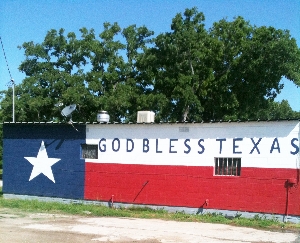 You'll Never Take Texas Out Of Me by Waylon Jennings

There's a Little Bit of Everything in Texas by Willie Nelson

That's my vacation story which seems to be mostly about Texas landmarks, photographs, family, imagination, and music.

Sign up for Joan's Newsletter and be the first to know about New Books and Giveaways.