Christmas Postponed Due to Plague

A definite lack of fa la la la la this year. We had one of 'those' holidays when each day found some new family member stricken with the prevailing stomach bug. Not all were hit as hard as others, but few have escaped, and those who have are living under the shadow. Our family get-together at my house has been put off until sometime in January, assuming that's any better. At least this particular wretchedness will have passed. I swear by good quality olive leaf and green tea extracts, plus, plus to help strengthen immunity. But yes, I got it too, though not as severely. Unless there's more than one kind...

Speaking of the actual plague, there were some interesting herbal cures and preventatives thought to be of aid. Talk about people madly searching for whatever they could lay their hands on. Those poor folk certainly were.

The following is from my herbal, Plants for a Medieval Herb Garden in the British Isles. Many of the herbs mentioned in it are also used today, though not necessarily in the same way. 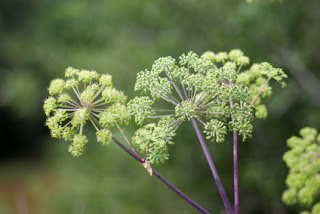 Angelica: According to one legend, the sacred herb angelica was revealed in a dream by an angel as a cure for the plague. Another possible explanation for its name is that the plant blooms around May 8th in England, the day of Michael the Archangel. Either way, angelica has strong associations with angels and was thought to be a protection against evil spirits and witchcraft. The entire plant was believed to hold power against spells and enchantment and held in such high esteem it was called, ‘The Root of the Holy Ghost.’ 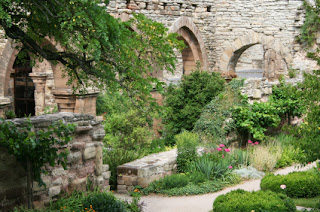 Blessed thistle, not to be confused with milk thistle, grows readily in England and most everywhere else, including my garden. It’s a noxious weed, but what a wealth of lore behind this prickly plant. Along the way, blessed thistle developed a reputation as a heal-all herb and was supposed to be able to cure the plague. Any plant thought to do that was revered, thus the reverent titles awarded this humble herb. I still root it out of my gardens but should probably imbibe it

Rue is a vaulted herb and one of the ingredients in the Vinegar of the Four Thieves, a fascinating concoction, heavily embellished with legend, that supposedly warded off the bubonic plague. In the Middle Ages and later, it was also considered, in many parts of Europe, a powerful defense against witches, and was used in many spells. It was also believed to bestow second sight. I'm out of rue. Gotta get me some plants.

Plant your sage and rue together,
The sage will grow in any weather . Old herbal quote 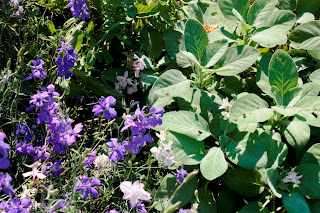 (Sage from our garden growing beside larkspur)

“Garlic formed the principal ingredient in the ‘Four Thieves Vinegar,’ which was adapted so successfully at Marseilles for protection against the plague when it prevailed there in 1722. This originated, it is said, with four thieves who confessed, that whilst protected by the liberal use of aromatic vinegar during the plague, they plundered the dead bodies of its victims with complete security. It is stated that during an outbreak of infectious fever in certain poor quarters of London, early last century, the French priests who constantly used Garlic in all their dishes, visited the worst cases with impunity, whilst the English clergy caught the infection, and in many instances fell victims to the disease.” (From my herbal. The original quote is attributed to A Modern Herbal.)

Parsley: By the Middle Ages, parsley had made its appearance in herbal medicines and was credited with curing a great range of ills, especially those having to do with the kidneys and liver. It has also been used against plague, asthma, dropsy, and jaundice as a carminative (an herb or preparation that either prevents formation of gas), an emmenagogue (promotes menstrual flow) and an aide to digestion. (Rodale’s Illustrated Encyclopedia of Herbs) 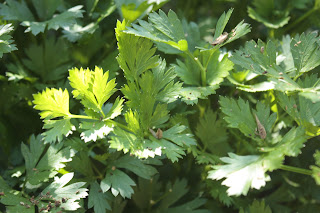 (Parsley in our garden)

Sage: The old herbalists recommend the juice of sage in warm water for curing hoarseness and coughs, and say it is also excellent to aid the memory. Of course, the juice of sage, along with vinegar, has been of use in times of the plague. “Gargles are made with Sage, Rosemary, Honeysuckles and Plantains, boiled in wine or water with some honey or alum put thereto, to wash sore mouths and throats, as need requireth.” (A Modern Herbal)

'Spices, so common today but rare then, also made their first appearance with the Crusaders. Among these were nutmeg, ginger, and peppercorns, only afforded by the wealthy. Medieval England was mad for these new taste sensations that added zest to their food and helped disguise spoiled meat. Nutmeg was touted as a cure for the plague.

Ginger also made that claim, and peppercorns were worth their weight in gold. Wars were fought over spices, but back to the plants. Unless an individual lived in an isolated region and gleaned only native species, a Medieval physic garden would have had many varieties. The herbs weren’t grown for their beauty alone, so much as for their healing properties. To the modern eye, they might appear rather weedy. Plants were peoples’ medicine kits, and aesthetics wasn’t the focus. These were not the opulent luxury gardens, but humble and earthy.' ~from my herbal 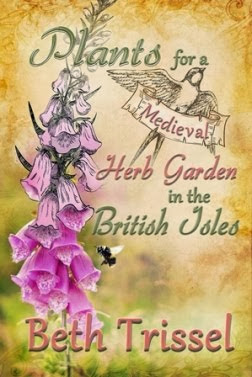 This info and much, much more is included in Plants for a Medieval Herb Garden in the British Isles, available in print with colorful images and in kindle, also illustrated, at Amazon.

Would you believe I highly recommend it? Seriously, though, I refer to this resource all the time. I incorporate herbs into much of my writing--and into my life.

Book description: An illustrated collection of plants that could have been grown in a Medieval Herb or Physic Garden in the British Isles. The major focus of this work is England and Scotland, but also touches on Ireland and Wales. Information is given as to the historic medicinal uses of these plants and the rich lore surrounding them.

Journey back to the days when herbs figured into every facet of life, offering relief from the ills of this realm and protection from evil in all its guises.

For more on me visit: https://bethtrissel.wordpress.com/
Posted by Beth Trissel at 7:07 AM