Writing a romance set at Christmas has its own complications. Readers buy them expecting certain elements. Writers hope to satisfy their need, with a story that captures a small part of what Christmas can mean-- along with two people who find something more.

My two novellas, written this fall, are set one hundred years apart, from 1905 to contemporary times. The heroines, both older and alone, share disillusionment in common and a need for a new start. The magic of Christmas is such a time for making the impossible possible.

In Sonoran Christmas, Frederica sets out not to remake her life but to find her daughter. With the help of information from a detective, she journeys to Tucson, Arizona-- where she finds a land like nothing she’s known and a man of the sort she’s only read about in the silly and fictitious dime novels.

Jeremiah Taggert, from an outlaw family that became infamous thanks to those books, steps forward to help Frederica, and one thing leads to another. He would stay away from this woman, completely beyond his reach, but she needs what a man like him can do. What he doesn’t know is she is the one woman who could bring him to his knees and give him his own happily ever after—if he can stay alive long enough. (no sex but there is gun violence)

“What kind of Christmases have you known?”
She sighed and stared into the fire. “Good when my first husband and son were alive.” She described how she lost them and her own sinking into depression. “When Cat needed me most, I’m afraid. Then I married Irving and that was a mistake on many levels. For me, Christmas has been a time of duty or loss. How about yours?”
“Drunkenness,” he said taking another long drag on his cigarette. “That’s what it was when I was little. My father fought with his brothers. He was a mean ba--… man. Given how my second son had a brutal streak, maybe it was in his blood.”
“How sad. But now with your sons having their families, it’s better, isn’t it?”
“Of course, not that it’s to my credit.”
She watched his dark expression as he fed more wood into their fire. “You carry around a lot of guilt, don’t you?” she asked when she saw he’d say no more. She realized in that they were two of a kind.
“I deserve it. A man chooses a trail, and he can’t blame anybody else when it turns out to be a wrong one.”
“He can turn around.”
“He can try but my daughter-in-law, Holly, has a word for it—karma. Sometimes there has to be payback.” 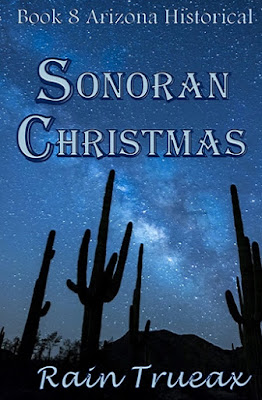 Novella available for eReaders at 99¢ until January 1: https://www.amazon.com/Sonoran-Christmas-Arizona-Historicals-Book-ebook/dp/B01MYXKWAG