When should a series die? by Paty Jager

I woke up in the middle of the night thinking about the Halsey Clan who are the center of my Halsey Brothers Series.

Someone suggested that I put a family tree in the front of the trilogy, Halsey Homecoming. So I lay in bed, thinking about how to make the lines for the family tree. I figured I could use Publisher to draw the lines and put in names, marriages, births, and deaths.

After that problem was solved, I started thinking about the five books I've already written and how much of the family members of the women who married the Halsey brothers do I need to have on the tree. The Halsey Homecoming will have Darcy's brother, Jeremy; Aileen's son, Colin; and the blind boy, Donny, from Doctor in Petticoats. I could also do spin-offs for Kelda's brothers from Logger in Petticoats. But my heart isn't in writing Kelda's brothers' stories.

I have an idea for a family of six sisters growing up in the wheat country in Oregon. The idea for the oldest girl has been in my head and jotted down on paper for nearly ten years. That could make another series and I'm more interested in that than continuing the Halsey's after the Homecoming trilogy.

I've read several series over the years and you can tell when an author gets tired of writing about the same family. The stories aren't as interesting and the characters as dynamic.

When as an author do you know to quit a series and when as a reader have you had enough?

This month you can purchase the five book Halsey Brother Series as a box set for $.99. 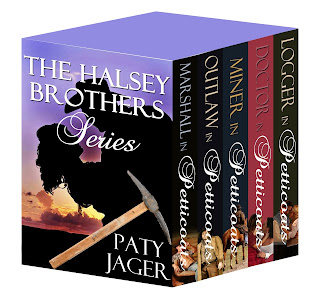