A Sneak Peak at Chasing Air by DeLaine Roberts 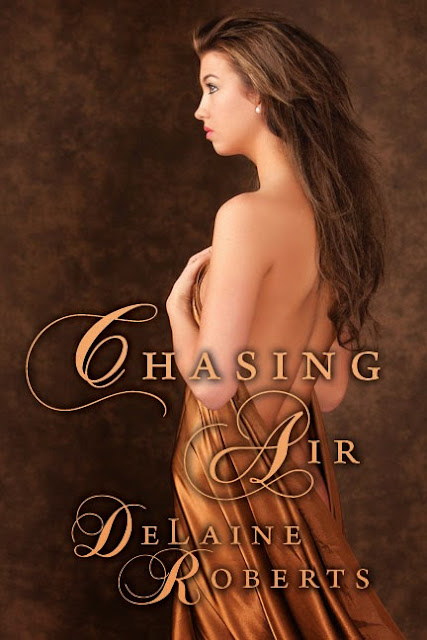 Accidentally marrying into the mob, Dr. Judith Bellonte Donati staged her death with the help of the FBI before the hired hit-man could finish the job. With a new name as Dr. Makenzie Holder and a new life, she struggles daily with the loss of connection with her family and the constant lurking of old ghosts from her past.

Gorgeous millionaire developer, Jonathan Bain offers her everything she wants in the way family, but his demanding demeanor is a reminder of the life she left behind.

Can Makenzie overlook her jaded past and give Jonathan a chance at redemption or will a chance encounter in the ER with Detective Ryler Buchanan bring about the love for a lifetime?

Chasing Air: A hot romance with a side of turbulence!
The Book Trailer
Chasing Air book trailer on YouTube

CHAPTER ONE
“Mmm, hello, Dr. Holder speaking.” Makenzie spoke in a sleep deprived fog because of a busy night in the ER. She finally had a chance during a calm spell to go lie down for a few minutes and had drifted off quickly. Sleep had been a luxury the past week while she worked double shifts to cover for a colleague on vacation.
“Doc, Metro is rolling this way in full trauma code with a kid shot in the chest. I’ve notified the trauma team.” Veronica’s normally calm manner was full of anxiety.
“Thanks, Veronica. Please let Dr. Trynn know. He’ll be pissy when you wake him up because he just left an hour or so ago, but he’ll get over it.” She quickly hung up the phone, grabbed her hairbrush and pulled her hair into a ponytail.
The night had finally quieted down in this busy little hospital just north of Dallas. Accepting the position over nine months ago, she thought that the small size and location of the facility might make for less activity so she opted for the night shift, hoping for a little trauma excitement from time to time, but having no idea  it was going to be all night excitement almost every night. But truthfully, she loved it.
When she approached the trauma room, Makenzie hadn’t expected the scene that faced her. The paramedics unloaded a young female patient, a victim of a drive by shooting on the freeway.
“Doc, large caliber gunshot wound to the upper left chest. She hasn’t breathed on her own since we arrived on scene,” the paramedic said. He continued to give Makenzie the report while they moved the girl to the trauma bed. Makenzie looked at the girl and her heart caught. Blonde hair, creamy skin and clear blue eyes was surrounded by medical equipment. So young and innocent, practically angelic.
“We coded her twice on the way in,” the paramedic continued to report.
The team worked with the girl for quite some time trying to stabilize her enough for surgery.
“Can I help you,” Veronica asked the woman.
“Yes, my daughter. She’s here somewhere.”
“Ma’am, who’s your daughter?”