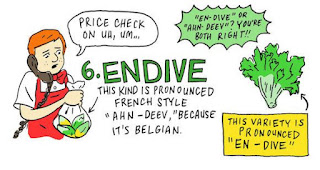 Hello, and welcome again to SMART GIRLS READ ROMANCE. Mispronouncing words is more common than you think. I found several lists of the most mispronounced words in the English language and you might be surprised by those at the top. See if you know how to pronounce the following.

Literary scholars discovered many people still say it incorrectly. They all fell prey to the “let’s add an i in there and make it four syllables” syndrome, making the word “mis-CHEE-vee-us.” This mispronunciation also lends itself to spelling errors. When people add the extra syllable, they often also add that i when they spell it, writing it “mischievious.”

Niche: A shallow recess in wall for a sculpture or other decorative object; a place or position suitable or appropriate for a person or thing; a market segment.

Correct: The preferred pronunciation was the one used since the seventeenth century ― a soft, long e “Neesh” like the 14-century French word meaning recess for a dog, or kennel. Incorrect "Nitch". Most people super-anglicize it and say “nitch.”

Do say: cardsharp | Don't say: card shark
You may be surprised to hear that card shark isn’t a phrase. Its mispronunciation from cardsharp over the years, however, has led to card shark being more popular in America than the original phrase.

Do say: espresso | Don't say: expresso
While I can't express my love for espresso enough, this word was borrowed from Italian well after the Latin prefix ex- had developed into the es- prefix.

* * *
Hope you learned how to pronounce some of the most commonly mispronounced words in the English language. Course, there are hundreds more!

Let us know you visited! In the comment section tell us one of the commonly mispronounced words you've come across. We'd love to hear from you.

If you haven't read my time travel/paranormal novel, Where the Rain Is Made, I'd love to tell you about it. While I wrote it some time ago, I think it's a book that's timeless. If you like paranormal, time travel and/or suspense, I think you'd love the story of Meko and Cesca.

"I walk alone on the edge of time, traveling far and near.
Born of the sun, kissed by the wind, the call of the raven screams in my ear."

A decadent-looking savage has captured Francesca DuVall and her brother Marsh. These days, she spends every waking moment planning escape from the brutal Dog Soldiers' camp.

Ethan Gray is a curator at a national museum . . . until he travels through time to help his beloved People. In the Cheyenne world he’s known as Meko, leader of the most revered and fearsome tribe of the plains.

RAVES For Where the Rain Is Made:

"Diablo delivered an awe-inspiring novel that made me appreciate the Native American and their way of life. Where the Rain Is Made is a definite keeper that everyone should read. You'll be hooked immediately!" 4.5 Stars, Manic Readers ⭐️⭐️⭐️⭐️⭐️

"This novel has a lot of passion and a gripping, original plot, not to mention well wrought characters. An edgy, compelling story. A very solid tale - one rooted in history." 5 Stars, Pat's Vampire Reviews ⭐️⭐️⭐️⭐️⭐️

"An incredible read and stays with you even when not reading. There were times the description was done so well it made this reviewer a touch jealous as well as quite happy to enjoy it."  4.5 Wings, Classic Reviews ⭐️⭐️⭐️⭐️⭐️

"This book will remain on my shelf for years to come and be revisited often :) I cringed, flinched, sighed and shed a tear. Any story that can do that has my vote all the way. Ms. Diablo, I look forward to seeing more from you in the future."  9 out of 10, Seriously Reviewed ⭐️⭐️⭐️⭐️⭐️ 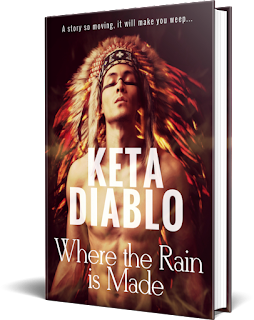 Thanks so much for stopping by today! Please drop by again to see either This Week's Word or more mispronounced words.

Have a great week!