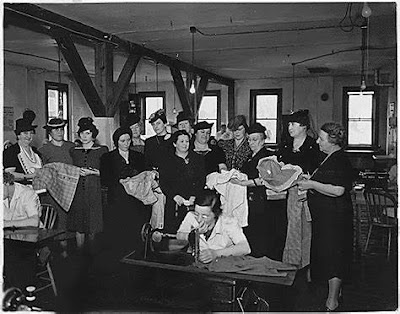 My mother told me many stories of her childhood as she grew up during the Great Depression. They lived in the wilds of the bottomland in Northeast Texas and like many families of the era, fell on hard times. One of her favorite expressions was that they were “po”, they didn’t have enough money to be poor.

I have thought many times over the years, that this scarcity during her childhood was likely a contributing factor to her creativity and industriousness later in life. Mom was an excellent seamstress, as was my Grandmother. In that regard, I would guess it also nurtured her habit of saving and repurposing everything, including garments and other textiles.

Most of the time, when people mention the name WPA, they are referring to the workforce of men laboring on highway projects and building parks and schools, but during the Depression, women, too, were heads of households and needed employment.

Work programs for women were first established in 1933 through the Women’s Division of the Federal Emergency Relief Administration (FERA), and later came under the Works Progress Administration (WPA). Opportunities ranged from clerical jobs or librarians, to canning, gardening, and sewing.

Nationally, seven percent of all WPA workers in relief programs were women in sewing projects. Sewing rooms could be found in rural areas and large cities alike. The U.S. government provided the machines and local communities covered building-related expenses. Starting pay was $35 a month for 140 hours work. 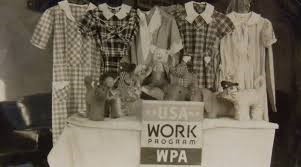 The women repaired used clothing and created new garments. Each woman was responsible from beginning to end. The newly sewn garment was tagged with a WPA label with the inscription “Not to be sold.” The finished items were then sent to the surplus commodities depot to be distributed to needy individuals, sometimes the women themselves, on the order of city and county welfare workers.

The goods they produced constituted a substantial savings to the local Community Chest and other relief budgets, while the workers became better seamstresses, designers, and cutters. They also trained one hour each day in a wide range of household arts or education for literacy.

The work program had a two-fold objective; first, to employ the women on projects according to their skills, and second, to train and retrain them so that through new or increased skills they could earn a livelihood n private employment or run better homes.

In 1938, when World War II kicked in, WPA sewing room workers reversed gears and started outfitting the U.S. military: "Articles of clothing, including shoes, and tents, blankets, knapsacks, web belting, canteen covers and the like, were made usable, thereby saving many millions of dollars. In addition, articles of furniture, draperies, light fixtures, and other articles were made for use in military and naval establishments" (FR-WPA, p. 68). 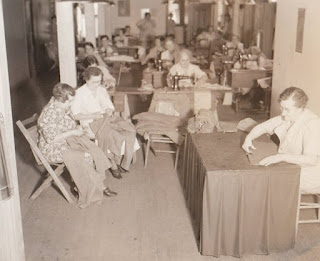 One work site was right here in Fort Worth, Texas. The Fort Worth seamstresses took immense pride in their work, proclaiming that the initials “WPA” stood for “We Patch Anything.”

The worker’s average output was two and a half garments a day (not including trim), and included men’s trousers, boys’ coveralls, baby clothes, and diapers. In an effort to not stigmatize those who were issued WPA clothing, great care was taken to create unique designs. A special department altered stock patterns. The local newspaper noted that one pattern could be used for fifty dresses, yet no two would look alike.

As the United States geared up for World War II, many women found better paying jobs in the defense industries and the WPA sewing rooms were disbanded by1943.

By the end of the program, it is reported that these women had created over 382 million articles of clothing and nearly 118 million other sewn textile items.

When we were cleaning Mom’s house after her passing, I was amazed at the number of little drawstring bags in the house, dating pre zip lock baggies. Some resembled old curtains or sheets while others were familiar remnants of clothing, all of them reminders of a time when everything was repurposed, and little was thrown away.