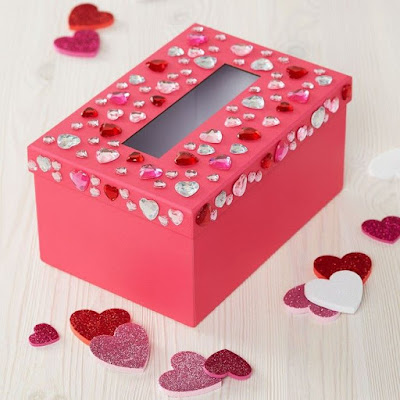 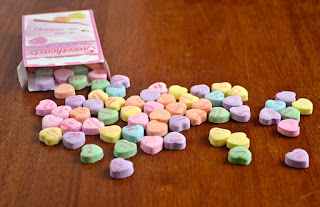 Valentine’s Day in grammar school was an occasion my classmates and I looked forward to. Girls with creative bents were selected a few days beforehand to decorate a cardboard box with pretty paper and hearts to hold the cards. A slit was cut in the top. We had studies the first half of the day, but in the afternoon, it was party time. Besides passing out the Valentine cards, the elected room mothers came with treats for all.

On the big day, each student dropped his/her Valentines in the pretty box and waited impatiently for the party to begin. In 4th grade, I had a crush on a boy, whose name I won't mention. I hoped he would give me a Valentine so I would know if he liked me too. Imagine my delight when I opened an envelope and found a card from him inside. It didn’t matter that a big, smiling skunk was staring at me from the card. I don’t recall the message from the skunk, but I cherished that card. 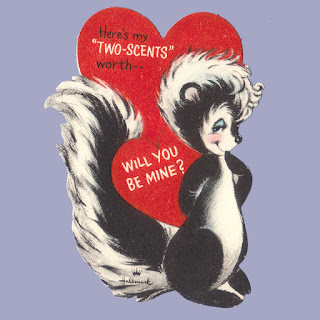 We had about 20-something students in our classroom. I normally had 10 cards to give away after the package was divided among my four siblings and me. There were never enough cards to give to every classmate. I fretted over leaving anyone out. I didn't want them to think I didn't like them.

Everyone knew the popular kids in the class "had" to receive Valentine cards. The least popular were lucky to receive half the number. Since I was timid, I fit into the latter group. I came home with around 10 cards, the same number I gave away. It made me feel a little rejected, but as I now ponder on it, I don’t believe this was a sign of rejection as much as a  shortage of Valentine cards shortage in certain families.

Like myself, some classmates came from large families. I figure their mothers, the same as mine, bought one large package of Valentines and divided them among their children. With 20-something classmates and only 10 cards, it was a hard choice.  If I had it to do over, I would address my Valentine cards to those classmates who would likely come up short. 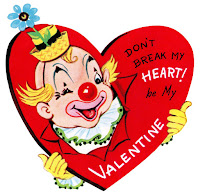 It was also 4th grade when a boy named William touched my heart on Valentine’s Day. He walked into the classroom the morning of our party, proudly bearing a plate piled high with home-baked cookies, and announced, “Mama said we couldn’t afford to buy valentines for everybody, so she baked  these cookies for everybody.” William’s eyes teared up as he proudly made his way down each aisle placing a cookie on every student's desk. 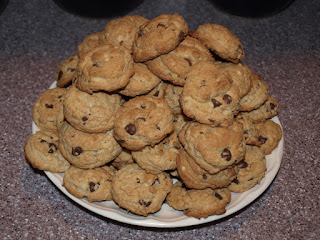 The cookies were soft, chewy, and delicious. More so, because William’s mother had sacrificed her time, and probably ingredients she could not afford to spare, to whip up a batch of cookies for a bunch of rambunctious kids.

William’s mother’s gift was better than the prettiest Valentine card any of us could receive because she put her love into every cookie. When someone makes a sacrifice like William's mother did, expecting nothing in return, well it makes the gift all the sweeter. 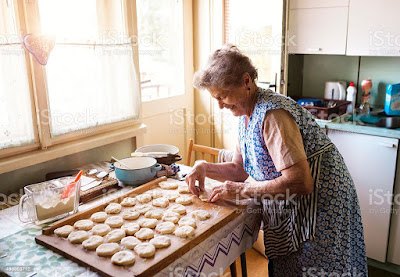 Do you have a Valentine’s Day memory you would like to share? We would love to read it.

*******************************************************
Does a Mail-Order Bride romance tickle your fancy? How about one with plenty of twists? Then you've come to the right place. NOT WHAT HE ORDERED fills the bill.
Carrie has no idea the web she'll become entangled in when she flees Denton, Texas on a possible murder charge. On the train she meets a young lady on her way to becoming a mail-order bride. Molly discloses that her best friend was in this with her but backed out. And since Carrie is disembarking at Abilene, the town the "no-show bride" was destined, Molly begs Carrie to tell the Rancher groom that his bride balked.
The Rancher, Josh, will not let Carrie get a word in edgewise when she tries to explain she is NOT his bride. Carrie gives up the argument when she finds four coins in her purse. She will explain later. Or will she? Josh's aunt pulls Carrie aside to whisper, "Josh thinks I ordered household help when I really ordered a bride for him."
Carrie is caught in a trap, partially of her own making. How can she reveal the truth when it will anger t Josh and upset Aunt Em? Especially when Carrie's heart is involved. To find out how it all ends, read this book.
https://www.amazon.com/Not-What-Ordered-Laurean-Brooks-ebook/dp/B076X653V8/ref=sr_1_1?dchild=1&keywords=Not+What+He+Ordered&qid=1613684322&sr=8-1 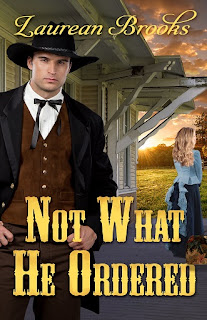