The Month of the Elf- Sherri Easley 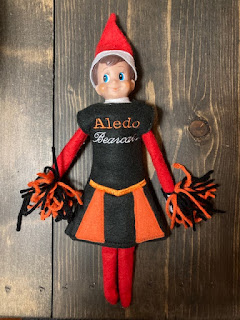 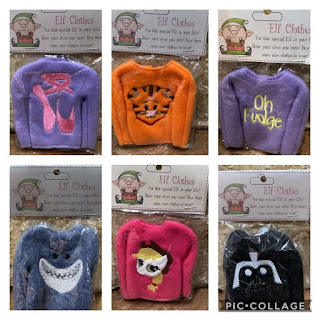 This has been some crazy year – I started out sewing nearly 1000 masks and now am ending the year making nearly 500 shirts and dresses for that popular Christmas elf.

The week of Thanksgiving, my daughter found a few random leftover shirts from last year’s craft show and listed them on her facebook and that started a sewing frenzy that I have struggled to keep up with.

So, what is this elf and why is he so popular? I did a little research, and this is what I found. I am inspired by the story of teamwork and marketing and how this one children’s book has become such a hit.

The Elf on the Shelf: A Christmas Tradition is a children’s book that was published in 2005. It was written by Carol Aebersold and her daughter Chanda Bell, and illustrated by Coë Steinwart. The Christmas book tells a story, written in rhyme that explains how Santa Claus knows who is naughty and nice.

The story describes elves visiting children from Thanksgiving to Christmas Eve, after which they return to the North Pole until the next holiday season. The original Elf on the Shelf set comes in a keepsake box that features a hardbound picture book and a small scout elf. The authors say the story is from a family tradition started by Carol Aebersold for her twin daughters.

This story describes how Santa's "scout elves" hide in people's homes to watch over events. Once everyone goes to bed, the scout elf flies back to the North Pole to report to Santa the activities, good and bad, that have taken place throughout the day. Before the family wakes up each morning, the scout elf flies back from the North Pole and hides. By hiding in a new spot each morning around the house, the scout elf plays an ongoing game of hide and seek with the family. The Elf on the Shelf explains that scout elves get their magic by being named and being loved by a child. In the back of each book, families have an opportunity to write their elf's name and the date that they adopted it. Once the elf is named, the scout elf receives its special Christmas magic, which allows it to fly to and from the North Pole.

The book tells how the magic might disappear if the scout elf is touched, so the rule for The Elf on the Shelf states, "There's only one rule that you have to follow, so I will come back and be here tomorrow: Please do not touch me. My magic might go, and Santa won't hear all I've seen or I know." Although families are told not to touch their scout elf, they can speak to it and tell it all their Christmas wishes so that it can report back to Santa accurately.

The story ends on Christmas Day with the elf leaving to stay with Santa for the rest of the year until the following Christmas season. (source Wikipedia)

Since this trend has become so popular, there are many similar elves being sold and even pets for them. Any parent who has caved to the “all my friends have one, can I get one too” is now saddled with the creative responsibility of daily moves and scenarios for the elf, for one month every year until the become a teen and grows out of it. This search for new daily adventures though, has created the need for more tiny shirts and costumes.