I Found a Pearl in my Research

I have to admit every new year, I go through the same routine. I start with new notepads and planners and of course, I must have new colored pens. Any time I have a new beginning, I have to buy fresh notepads and the new year is no different.

One of the things I hope to do in this new year (besides learn how to  format this blog) is publish another book. That last one took 40 years and as my publishing mentor told me “you might want to pick up the pace a bit.”

I grew up on a farm outside of Mount Pleasant, Texas, and that general area was the setting for my first novel. The love interest in my book was from Jefferson, Texas, fifty miles away. I decided to research that area, more specifically, Caddo Lake, for my next book.

I have been to Jefferson and Caddo Lake many times and the mystery and lore along with the hanging Spanish moss on the Bald Cypress tress, always pulls me in. During my research, I came across one particular event that happened there near the turn of the century, I had never heard about. I am fascinated.

First, if you are not familiar with this area, here’s the scoop. In the 1850’s, Jefferson was one of the busiest inland port cities in the state. As the westernmost outpost for navigation on the Red River, Jefferson became an important jumping-off point for westbound settlers.

The first steamboat, the Llama, reached Jefferson in late 1843 or early 1844. With persistent efforts to improve navigation, steamboats soon traveled to Jefferson from New Orleans and Shreveport by way of the Mississippi and Red rivers, Caddo Lake and Cypress Bayou, bringing supplies and goods. 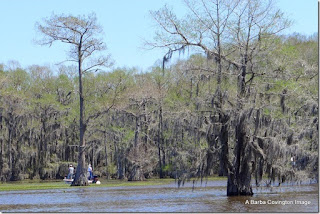 All of this ended with the destruction of the Great Raft, a natural dam of tree trunks and roots on the Red River around Shreveport. Nitroglycerin charges removed the last portion of the blockage. While this made the upper section of the river navigable, it lowered the water level of the surrounding lakes and streams, including
those to Jefferson.

By the early 1900s, river commerce was dead. 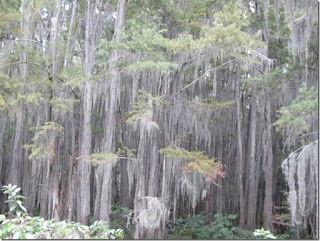 Fifteen miles east of Jefferson you’ll find Caddo Lake, Texas’ largest natural lake, which straddles the Texas-Louisiana border. Like Jefferson and the bayou, a sense of mystery and history shroud the lake, enhanced by the ghostly drapes of Spanish moss hanging thickly from the limbs of overhanging cypress trees and the seemingly endless maze of the waterways.


The Caddo Lake formation is also cloaked in myth and mystery. Legend has it that a Caddo Indian chief disobeyed the Great Spirit, who then sent an earthquake to flood the chief’s village. For many years, people linked the formation of Caddo to the historic New Madrid, Mo., earthquake of 1811. More likely, the shifting Great Raft on the Red River, with logs piling up in the upper section and rotting away in the bottom section, reached a point in 1800 where it caused the Red to disperse and flood Big Cypress Bayou.
An abundance of wildlife lives here including deer, bobcat, red foxes, coyotes, beavers, nutria, wild hogs, thirty varieties of snakes and an occasional alligator. There are also many species of fish, even though the bayou is only 4 to 6 feet deep. 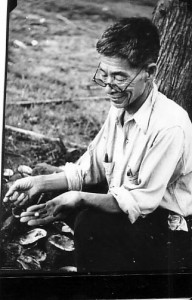 In 1909, Sachihiko Ono “George” Murata went to work for Gulf Oil on Caddo Lake. During his time as a cook, he began to find pearls in freshwater mussels. After George found two pearls valued at $1,500 each, the Great Pearl Rush of Texas began.

Murata sold his first large pearl for $1500 to Tiffany’s in New York. Farm families from the area began to converge on Potter’s Point. They came by wagon, on horseback, and by walking. Soon, the shoreline and hillside were covered by a tent city as fortune hunters, known as “pearl hogs,” joined in. It was a good family get–away for them even if no pearls of value were found. Most of these people were hard-working cotton and/or corn farmers and had homes to go back to. These folks would wade around in the water on hands and knees, digging into the mud, to find these mussels. Most hunters became discouraged after a few weeks and went back home to the farm, but some “hogs” were successful. 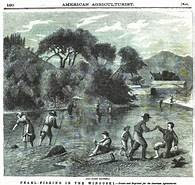 A 1913 U.S. Bureau of Fisheries bulletin reported that in 1912, the value of pearls taken from both the Louisiana and Texas sides of the lake was $99,200, or around $1.9 million in today’s dollars.

The Great Pearl Rush of Texas was short lived. In 1914, a crude earthen dam was built to help raise the water levels that had dropped with the previous dismantling of the Great Raft. As a result, the mussel beds were covered with deep water, bringing the pearl rush to a screeching halt.


Today, if you visit the area, the eerie moss-draped cypress trees and abundant wildlife are still a throwback to centuries gone by. You can stay in one of Jefferson’s many B&Bs or campgrounds. You can also ride the restored steam engine along the Big Cypress Bayou or take one of the many ghost tours. Caddo is a place to be explored and experienced and was once the home to the Great Pearl Rush of Texas.

If you have a chance, please read my book but remember, this is my first. ;) I have learned so much from this one!

Thank you everyone and Happy New Year!

So about me: I just published my first book October- A Love to Call My Own which was inspired by stories my mom told of growing up poor during the depression. To make matters worse, they lived in the rugged bottom land of East Texas near Mount Pleasant. These stories just can't be made up.
I grew up on a farm very near to where Mom did and experienced the hog killing, gardening, hunting and the country lifestyle I wrote about. I also spent a lot of time in that bottom land looking for Indian arrowheads and relics.
I was the youngest of five kids- twenty years apart. My parents were older when they had me and had lots of the old country ways. My mother made her own lye soap, butter and buttermilk, jelly and canned our food from the garden. She was an incredible seamstress.
Today I work in Strategy for Boeing during the day and clear my mind with my sewing/embroidery business by night- I love to write and have started many stories over the years so maybe this will be a catalyst for me.

All of you are such an inspiration!

I live in Fort Worth with my dogs-a Shihtzu named Snookie and my Lhaso, Bandit and my tuxedo cat Button and my Manx, Bobbin. 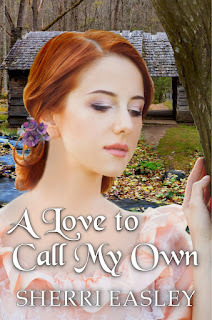