What would you do if the only mother you had ever known suddenly told you she was dying and you must go out on your own to start your own school for children? Would you become a Mail Order Bride?

That's exactly what happened to the twenty-five women who were raised and now teach at the Wigg School and Foundling Home. Madam Wigg, or Wiggie, as some of the girls affectionately call her, has found out that she is dying and she wants her girls to go out into the world and start their own schools. There is no way to help the girls monetarily at this time, so she suggests the girls look through the paper, called The Bride's Bulletin, for a husband.

As the girls came to Madam Wigg as a foundling, she named them alphabetically. She called them in to see her in groups of four, ABCD, EFGH, etc, when she had news to share. This time was no different. The first group took a copy of The Bride's Bulletin and passed it on to the next group. Most became mail order brides, while some struck out on their own, all hoping to find their Happily Ever After.

There are a couple of items the women speculate about. Is Wiggie really dying? What happened to Xenia? These will be answered in the final book Zara's Zephyr.

I hope you will read these as they are all available in KU or can be purchased separately. Thanks for stopping by today,
Carra Copelin.


The following is a list of all the books in the ALPHABET MAIL-ORDER BRIDES SERIES. 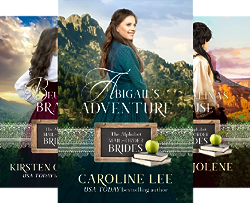 Posted by Carra Copelin at 1:57 PM