I am re-posting this from my blog in honor of Wilder
and her contribution to young readers who've
been fans of  her many book for decades.

Long before Laura Ingalls Wilder’s books became part of the Little House on the Prairie television series, the Little House books were a favorite of mine as a child, starting with the Little House in the Big Woods, published by Harper in 1932. It was Wilder’s first book and was based on memories of her early childhood in the big woods near Pepin, Wisconsin, in the early 1870s. It propelled her Little House series consisting of eight more books which recorded pioneer life late in the 19th century based on her family’s experiences on the American frontier.

I was an avid reader of all the Little House books. I remember taking one of them outside on my swing during the summer and devouring it as quickly as possible. There was something magical about the big woods, the prairie, the unsettled Dakota Territory, the farm, the banks of a Plum Creek and life during a blizzard. 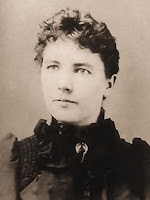 Laura Ingalls was the second child of five children to Charles and Caroline Ingalls. During her childhood, her father moved the family many times, but over the winter of 1879-1880, he filed for a formal homestead in De Smet, South Dakota, which became her parents’ and her older sister’s (Mary) home for the remainder of their lives.

Two months before her 16th birthday, Laura Ingalls accepted her first teaching position. In order to help her family financially, she taught three terms in one-room school houses between 1883 and 1885, worked for the local dressmaker, and attend high school in De Smet, although she didn’t graduate. Her teaching career and studies ended when Laura married 28-year-old Almanzo Wilder on August 25, 1885. She was eighteen years old.

Although there is much controversy over some works,
which Laura Ingalls Wilder’s daughter, Rose, supposedly
claimed to collaborate on with her mother, the brilliance
and importance of  the books far outweigh second
guessing what might be truthful or false claims.

Laura Ingalls Wilder is considered a literary legend.
School-age children have been enthralled with the
series for decades. I was one of them.


All my books are currently listed on my AMAZON AUTHOR PAGE:
https://www.amazon.com/Judy-Ann-Davis/e/B006GXN502/
Posted by Judy Ann Davis at 12:30 AM