My Kitten Muse and Holiday Release!

I am greatly entertained by my new little buddy, Sparky McGee. Big kitties like him and Puppy Cooper plays and plays with the baby. Our rescue dog, Jilly, is on board. When I sit on the couch with my laptop to write I often have a purring kitten curled beside me, a second cat humming in my ear, a third tucked in as closely as possible, and a fourth perched overhead. The dogs each have their spots. Oh how happy we all are cozied up together. The only challenge with writing is staying awake because these sleepy rumbling kitties make me drowsy. I often end up tucked beside them for a nap. 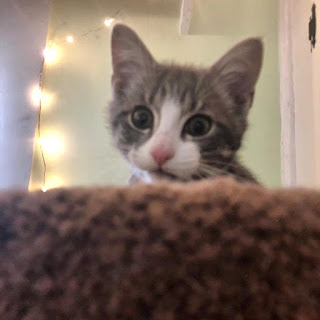 (Sparky McGee surveying his kingdom from his perch)

You can keep a dog; but it is the cat who keeps people, because cats find humans useful domestic animals. ~George Mikes

A kitten is the most irresistible comedian in the world. Its wide-open eyes gleam with wonder and mirth. It darts madly at nothing at all, and then, as though suddenly checked in the pursuit, prances sideways on its hind legs with ridiculous agility and zeal. ~Agnes Repplier 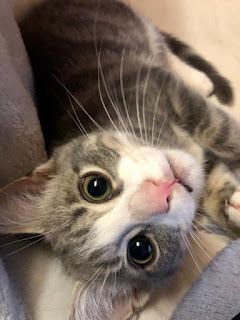 (What I see when looking down beside me as I write)

A catless writer is almost inconceivable; even Ernest Hemingway, manly follower of the hunting trophy and the bullfight, lived waist-deep in cats. It's a perverse taste, really, since it would be easier to write with a herd of buffalo in the room than even one cat; they make nests in the notes and bite the end of the pen and walk on the typewriter keys. ~Barbara Holland, The Name of the Cat, 1988

If I called her she would pretend not to hear, but would come a few moments later when it could appear that she had thought of doing so first. ~Arthur Weigall 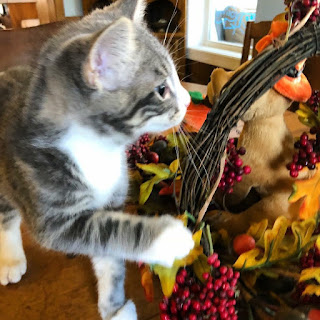 Recent news on the writing front: A New Release! 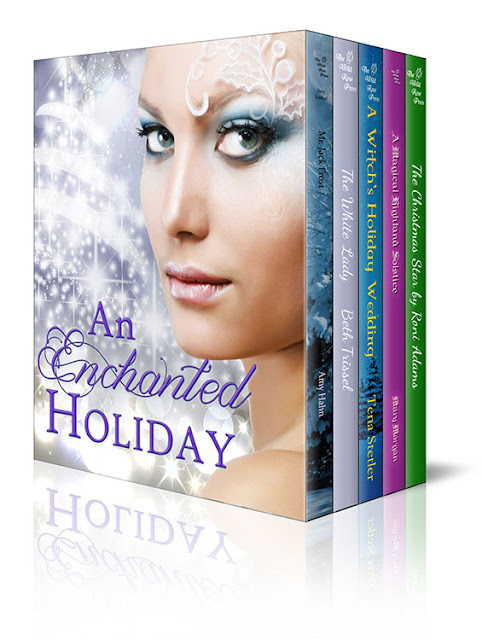 I’m excited to have my time travel fantasy romance, The White Lady, in the new holiday boxed set release from The Wild Rose Press. Available in preorder now–out November 8th.
Blurbs for An Enchanted Holiday:
Mr. Jack Frost by Amy Hahn
Once upon a wintry evening she made a wish on Christmas snow…
Reagan Thorton never expected her wish to come true, even when Jack Frost appears on her doorstep. She doesn’t believe such nonsense or in happy endings.
Jack has until Christmas Eve to make her rediscover happiness in life and joy in the holiday season. But Reagan is falling in love and Jack knows that once Christmas Eve arrives he’ll vanish forever in a swirl of snow. Or will he? After all, he has become the reason for her happiness.
The White Lady by Beth Trissel
It’s just two weeks before Christmas, and Avery Dunham cannot change Ignus Burke’s mind. They must travel back in time to rescue the White Lady in the portrait above his fireplace. The magic-wielding wizard is obsessed with her. Avery was right: this adventure is not going to be like any other.
A Witch’s Holiday Wedding by Tena Stetler
Elemental witch Pepper McKay happily agrees to marry former SEAL Lathen Quartz. Planning a wedding and operating their wildlife rescue on enchanted McKay land takes a toll. Will the nosy McKay ghosts, Lathen’s werewolf pack, Pepper’s parents, and her best friend help or hinder the wedding and holiday plans?
A Magical Highland Solstice by Mary Morgan
Laird Cormac Murray has vowed to never take a wife. When a lost path in Scotland leads Eve Brannigan to a handsome but gruff Highlander, she fights the temptation to allow love to enter her heart for the first time. Can the Fae and the magic of the Yule season bring together two souls who have forsaken love?
The Christmas Star by Roni Adams
A holiday fling with Nick Christopoulus on a Greece Isle is just the vacation Chrissy Star needs from her world of elves. When she disappears after a night of magical sex, Nick is determined to track her down. But how can Nick, a non-believer, find a magical place called Christmas Town?
Available in kindle at: https://www.amazon.com/Enchanted-Holiday-Digital-Boxed-Set-ebook/dp/B07J4BB8JW/
For more on me visit my Amazon Author Page: https://www.amazon.com/Beth-Trissel/e/B002BLLAJ6/