Hello Friends, Fans and Followers of Smart Girls Read Romance. We're thrilled you stopped by in the 'spooky' month of October.

Autumn is a great time to plan a fall get-a-way. You won't find lovelier places to visit than the Midwest. Before trees shed their leaves in preparation for winter, they often put on a brilliant display of color...deep burgundy, buttercup yellow and sunburst orange. 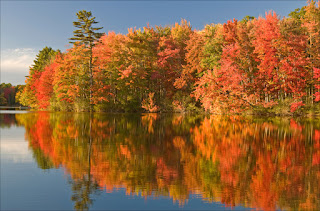 Here's hoping you take time to schedule a short vacation this fall and enjoy the same beauty depicted in this image from the state of Wisconsin.

Many small towns hold fall festivals and Halloween galas meant to attract not only local residents but adventure-seeking tourists. I can't list all the links of special getaways in the Midwest, but below I covered some spectacular events in Iowa, Wisconsin and Minnesota (Click on the links for more information). Better yet, Google "Autumn Getaways (insert your State name here)".

Of course I want to tell you about my latest SPOOKY release on October 1st.
Like many of my books, COMES A SPECTER, Book 2, Ghostland Series, has a sinister ghost. One reviewer said the specter scared the bejeebers out of her, (She still gave it 5 stars.)

About Comes A Specter:
Western Historical/Paranormal

Six months ago, Anya Fleming's ten- year-old son, Willie-boy, found his father hanging in the barn. Traumatized over his father's suicide, the boy hasn't spoken a word since. Now, Willie-boy has come down with a grave, unknown illness and there's only one man who can save him, Sutter Sky, a learned Blackfoot shaman known as Yellow Smoke—a shaman who was once deeply in love with Anya. 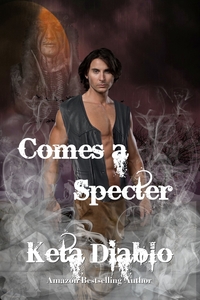 But Fate had other plans for Anya and Sutter—she was forced to marry Lewis Fleming, a cruel man who berated her night and day, and brokenhearted Sutter immersed himself in the mystical customs and beliefs of his People and became a healer.

As if Anya didn't have enough to deal with after her husband's death and son's illness, an evil, sinister ghost is terrorizing their ranch. Anya is convinced the spirit is Lewis, who apparently isn't done making her life miserable.

When she turns to Yellow Smoke for help, will he put side his bitterness and save Willie-boy? And can the renowned shaman dispel the powerful ghost from their lives and send him back to Hades?

AMAZON
Posted by Keta Diablo at 2:00 AM