Where Did That Idea Come From?

Have you ever wondered where an author gets their ideas for the stories they write? Well, I did. Once I began to write my own stories, I wondered how I would come up with the plots and ideas to get to the end of the book. Turns out, after I finished the first book, the ideas for the next ones began to reveal themselves.

More recently, a couple of story ideas were inspired by my brother and a few of his life experiences. For those who don't know, my brother is Country Gospel singer/songwriter, Gunner Carr. https://www.philgunnercarrmusic.com/

Last year he helped me come up with an idea for a book I was writing at the time, The Legend of Bad Moon Rising, and I asked him for some insight into a character he had helped me develop. The character was not part of the contemporary romance, but a major part of the history of the story and namesake in the title. I wanted to get the flavor of the man right in his story and dialogue, so I called Gunner.
As we talked and I read him some of what I had written, he said, "Sis, I don't know anything about writing books. I'm just a three minute man." Well, I knew that statement from a songwriter, would have to find its way into a book. Four books later, I was able to sit down and write that story.
This past summer I told you I was writing a Christmas story titled, CHRISTMAS, LIBERTY, AND THE THREE MINUTE MAN. It's a fun read about a sassy event planner from Nashville and a sexy cowboy songwriter from Texas. 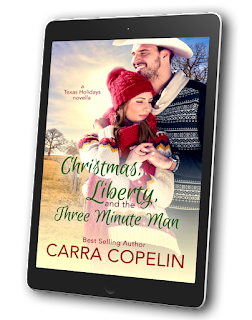 Liberty Ann Hart, tries not to fall for a local carpenter, but his charisma is difficult to ignore, especially at Christmas and in the rustic setting of a Texas town called Mistletoe. Daniel Dylan Layman is determined to show the headstrong city woman a country life. Will a Christmas fundraiser spark a lifetime of love?

It will first appear in the anthology, A CHRISTMAS COWBOY TO KEEP, that is now out in preorder. I think you'll like it. 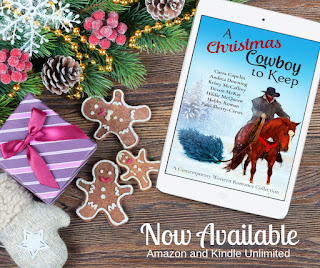 Don’t miss this holiday collection of modern-day cowboys and the women they love, featuring the same USA Today, Amazon Bestselling, and Award-Winning authors from “A Cowboy to Keep,” which garnered 55 reviews with an average rating of 4.5 stars.

A CHRISTMAS CAROLE by Andrea Downing
Carrie Matheson and her son are trying to settle into a new life in Wyoming. Tate Schrugge is trying to ditch his Scrooge and play Santa to the young boy. But will there be a Dickens of a romance by Christmas?

THE PEPPERMINT TREE by Kristy McCaffrey
Lawyer Skye Mallory returns home for the holidays due to an unexpected inheritance, and cowboy Joe Carrigan stands in her way.

THE DEVIL’S CHRISTMAS KISS by Devon McKay
When Kristen Kelly receives a Christmas kiss from Cole Lawson, she doesn’t believe it means anything. But Cole sets out to make things right with the woman of his heart.

THE BEST CHRISTMAS by Hebby Roman
All Sofia Rossi wants is to re-connect with her estranged son. But can Gar McCulloch, a handsome cowboy who runs a juvenile rehab ranch, be the answer to her problems?

COUNTING DOWN TO CHRISTMAS by Patti Sherry-Crews
Wedding planner Melody Evans views happily-ever-after endings with a skeptical eye. Veterinarian Leland Jennings IV thinks Christmas is for kids. Can the holiday spirit bring them together?
A Christmas Cowboy to Keep

Posted by Carra Copelin at 5:00 AM