Here it is August already and my summer's just getting started.  That's because writing books and seasons don't always mesh.  Authors don't get out of school for summer break.  But I took a vacation anyway after finishing two books, Blazing Bullets in Deadwood Gulch (Honey Beaulieu - Man Hunter #3), and Idaho Fairytale Bride (Rocky Mountain Romances #2).

A fun getaway it was, so now I'll dutifully subject you to some photos that were taken at my readers' event in Silver City, Idaho.

This is the second time I've sponsored this event, and I chose Silver City because: 1) that's where many of my books are set; 2) I grew up just north of there and spent a lot of time wishing I could live in Silver; and 3) I wanted my readers to have the opportunity to spend a weekend in the real Old West.

First of all, I should explain that people expecting modern services in Silver City will be a bit disappointed.  There are no gas stations, grocery stores, or even electricity (they do have solar-powered lights and the hotel has flush toilets and showers).  If AT&T is not your cell phone carrier, then you have no connection.

How on earth did people live back in the 1800s?  That's what we find out every year in Silver, so be sure to book your room for next year!  I'll give you a hint--we make our own entertainment and we actually visit with each other, complete with eye contact and hugs and lots of laughter.

It's a weekend where people can be themselves with no electronic interference.  The kids have a ball outside instead of playing video games.  You don't see a whole table of people all looking down at their cell phones.  We talk to each other--tell jokes, reminisce, talk books... talk. To me, it's heaven on earth.

About that entertainment...we had two forms.  First, we had Daria Paxton, award-winning violinist, who played fiddle (same instrument, different technique), and her dad, Matt Paxton on guitar and vocals.  Daria can really make that fiddle sing!  She played Irish jigs and everything else.  Matt sang classic country tunes and even a few Beatles songs.  I can't figure out how to get the video from my phone to here, but to the left is a still picture.

The Paxtons are old family friends.  Matt's parents and my dad were all in the same class at Homedale High School, Class of '44.  Matt and my brother have been friends since they came into this world the same year.  Not only are Daria and Matt very talented, they're part of our family, too.  This is exactly the sort of situation you'd find in the Old West.

And what's a doin's without a melodrama.  We laughed ourselves silly over Professor Walker's Miracle Elixir of Life, and Dr. Paxton's Blood and Liver Renovating Tonic.  The latter of which, according to Nick Monteiro who played Ichabod, Dr. Paxton's pitch man, is made of distilled wombat testicles.

Okay, so I wrote the script.  It was really, really bad.  So were the actors, all except for Daria, Nick, and Curtain Rod #1 and Curtain Rod #2.  The rest of us all managed to mess up our lines.  But the audience loved it and all the actors (calling us actors is stretching it a bit) had a great time and we'll do it again next year.  We're gluttons for punishment, I guess. Ha!

We had an auction for charity.  Sherry Walker organized it and made most of the baskets, and Brenda Paxton (Matt's wife) also made a nice one.  My brother, Ken Walker, was the auctioneer.  The gals in the kitchen soon learned that if they banged a pan too loud, he considered it a bid.  We had a good laugh about that.  All in all, we raised nearly $300 for the Children's Tumor Foundation, which will go on Mercedes Christesen's NF Walk page.

I hated to leave Silver but life goes on and we all had to get back to our hectic lives.  As for me, I have books to get into print and two more books to write this year (I hope).

We finally got home a week later.  It's so nice to sleep in our own bed!  But we had a great time, and I returned to some wonderful news: Hot Work in Fry Pan Gulch and Sidetracked in Silver City both finaled in the Will Rogers Medallion Award contest!  Besides being tickled about that, I now get to go back to Texas and visit with my buddy, Caroline Clemmons, so I'm excited about that, too.  And we're dragging her and Hero to the awards banquet because I'll need all the bracing up I can get. 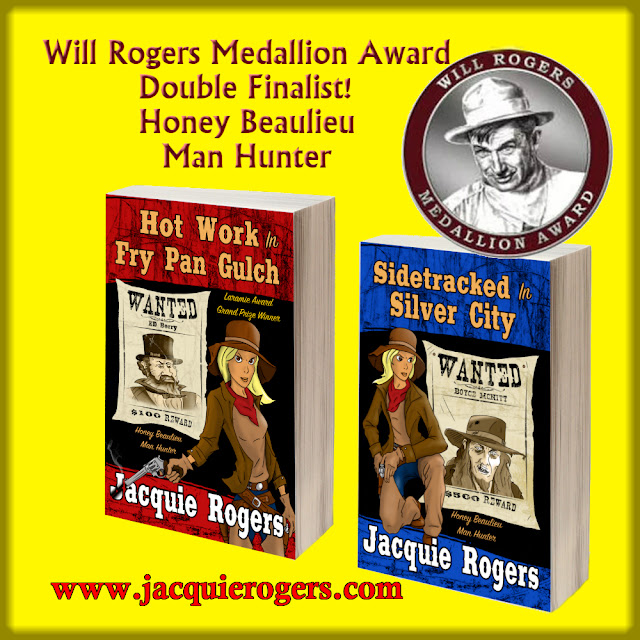 What's up next?  We're heading back to Idaho to view the eclipse.  Meantime, I'm starting the sixth book of the Hearts of Owyhee series.  This will be Bram's book, and I have him in an awful dilemma. Bwahaha!


Romancing The West | Pickle Barrel Bar and Books
Posted by Jacquie Rogers at 5:11 AM