Getting the rights to a book back from a large publishing house can be a challenge. I spent at least three years trying to get the rights back on my last traditionally published book, MAN OF THE WEST.

Last year, I finally got that letter returning all rights to me. I'm now currently in the process of making some revisions and will soon be releasing it as an Anna Jeffrey book. It was originally published under the pseudonym Sadie Callahan.

I had to have a new cover designed. First, you aren't allowed to use the publishing house's original cover because they own it. Second, it had Sadie Callahan's name on it, a pen name that I will probably never use again. So I called on the fabulous Kim Killion (as I always do) to design the new cover. 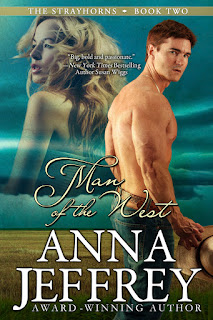 This book is a sequel to LONE STAR WOMAN. The hero is the second Strayhorn cousin who is still trying to live down his father's disgrace.

Sheriff of a small, remote town in the Texas Panhandle, Jake Strayhorn’s calm and uncomplicated life changes when he meets the Circle C Ranch's new cook. He’s drawn instantly to her wholesome beauty, different from any other woman he’s ever known. As a career cop, his honed instincts detect she’s running from something, but she refuses to reveal her past. How can he protect her if he doesn’t know what's making her so skittish?
Escaping an abusive, drug-addicted husband in the dead of night, Jolie Jensen found the perfect hiding place on the Circle C Ranch, working as a cook. This seems to be the safest place she's found in years, yet fear lingers. Billy Jensen’s bound to find her and their daughter, and with no family, the only person she knows she can lean on is the too-attractive sheriff. He’s shown himself willing to be her protector, but can she protect her heart from the quiet, strong Jake Strayhorn?

I love writing sagas about big families and all of the drama that can be associated with them. And here's the blurb to LONE STAR WOMAN, a book that was also originally released as a Sadie Callahan book.

Jude Strayhorn, the only child of the vast Circle C Ranch’s CEO, is in constant conflict with her father and grandfather. Her greatest desire is to exert her education and influence on the ranch’s operation, but the two men thwart her at every turn. Giving up, she goes outside the Circle C intending to use her trust fund to buy a small spread from a deceased widow’s estate where she can put her ideas into practice. That is, until she runs headlong into the widow’s heir, Brady Fallon, who has his own plans for the 6-0 Ranch.

Brady Fallon is no stranger to Willard County, though he hasn’t been around since childhood. His inheritance needs a lot of work and he needs money to put it back into shape and revive it as a cattle operation. He hires on as a hand at the Circle C Ranch, a move that leads to unexpected benefits for his future as well as unwanted conflict with his boss’s daughter. Can he set his attraction to her aside for his own good?

A third book is planned for this series. It will be the third Strayhorn cousin's story. The title is SON OF THE PLAINS.