Setting As A Character by Suzanne Rossi

I just want to take a moment to wish you all a wonderful Memorial Day and say thank you to the men and women in our armed forces. You do a great job and I appreciate it.

The two things that drive a good book are characters the reader can relate to and like, along with a plot that takes us on a journey around each and every bend of the story. Some authors are character oriented, adjusting the plot to fit the characters' actions. Occasionally, characters take on a life of their own and go with it. Not much the author can do except follow. Other writers structure the plot so that the characters must act and react to the situation. Both are effective, although as authors we must make sure one doesn't overtake the other. A great plot with weak characters is as unsatisfying as great characters following a weak plot line.

But there's one other thing that can drive both--the setting. Believe it or not, the setting of a story can project both elements of character and plot.

For instance, in my first book, Along Came Quinn, I set most of the story in Guatemala. I took a city girl, hooked her up with an adventurer (yes, opposites attract), and off they go to Central America to search for lost treasure. If this sounds a lot like Romancing the Stone, it is. I love that movie, and while my story is similar, it does have a nice plot twist.

At any rate, back to the setting. Have I ever been to Guatemala? No, and I'm not likely to go anytime soon. If you are going to use an exotic place but have never been there, then do extensive research. Find out the political atmosphere, tourist spots, food, rural life, the weather, the language(s) spoken, the customs of the people, and the flora and fauna. I'll bet I had close to fifty pages of notes in a folder by the time I finished. I used, perhaps, two pages in the story.

In Nearly Departed, I invented a dilapidated Antebellum mansion as the catalyst to bring my hero and heroine together. I set the story in Northern Mississippi, a locale I know. The house became as much of a character as Cybil and Max, not to mention the ghosts inhabiting it.

My book, Deadly Inheritance, was set on a Caribbean island that I imagined as a cross between Jamaica and Barbados. I used the size, food, and location of Jamaica, but since I had vacationed one year in Barbados, I utilized the physical features and the people. It was a blend that worked well. I had one reader tell me they felt like they were there the whole time. Always a good thing to hear.

At one point in time, I worked first as a dealer of blackjack and roulette, then later as a floor supervisor at a casino in Tunica, Mississippi. It became the setting for Death is the Pits. I brought my personal knowledge of how casinos are run (as opposed to should be run--there was a difference), the gamblers I have known, and how the games are played to this story. Adding a couple of bodies along the way was just plain fun.

For The Good Twin, I adopted my brother-in-law's lake house in North Central Illinois as one of the houses in the book. I'm not sure if it was really a character, but the ambiance was what I wanted to achieve. The real lake area works well as my fictional one for the suspense of prowlers in the woods, and intruders by water.

So, the next time you pick up a book, pay attention to the setting. Do you feel like you're there with the characters? Is it a place you might like to visit? Can you identify with it in some way--your hometown, your favorite relative's home or city, or where you currently live? If so, then the author has done his or her job.

Before I let you go, I want to celebrate by sharing with you the blurb and cover of my next book, Killer Conference. It's the second book of a series I call The Snoop Group. Book #1 was A Novel Death. I don't have a release date yet, but will let you know when I do.

"Anne Jamieson and her critique partners are once again thrown into murder and mayhem while attending a writers conference. Anne starts to believe she is a dead body magnet when she finds obnoxious agent, Carmella Radcliff, stabbed to death in the ladies room. This brings Detective Gil Collins onto the scene. Anne was hoping for a relationship when he was the lead detective on an earlier case she helped investigate, but lies and secrets drove them apart. The Snoop Group as they have named themselves, decide to assist again, but then, a second agent is killed. The conference offers a long line of suspects and motives. Was it the best-selling author? A disgruntled editor? An angry agent? An attendee whose work was rejected? Or someone else? Time is running out and the conference will only last so long. Amid the commotion, can Gil and Anne rekindle the spark from months ago before the murderer claims Anne as a third victim?" 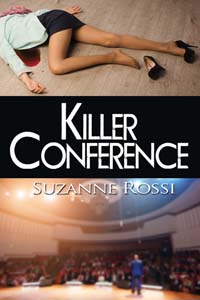 One more thing. May marks my first anniversary as a member of this blog team. I want to thank Caroline Clemmons for inviting me to join such wonderful authors. I've loved participating and look forward to a long relationship with them and the readers of Smart Girls Read Romance.

Thanks to all, and I'll see you again next month.