Yesterday and Today - How #Writing Has Changed 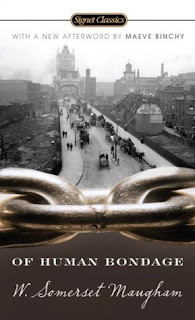 A while back I purchased Of Human Bondage by W. Somerset Maugham for my Kindle. It’s a great story, written 100 years ago but with universal themes that have stood the test of time. But as I was reading, I couldn’t help but notice all the modern “rules” that the author had broken. Writing sure has changed over the years! Here are some examples.

Modern Rule: Don’t open your story with the weather.
Maugham:  The day broke gray and dull. The clouds hung heavily, and there was a rawness in the air that suggested snow.
My comment: I think this rule came about in response to the cliché: “It was a dark and stormy night.”

Modern Rule: Use “said” in dialogue and avoid other verbs, such as injected, cajoled, implored, etc.
Maugham: “Oh, don’t take him away yet,” she moaned.
My comment: Stephen King advocates the use of “said” and avoidance of other verbs. I’ll admit it’s distracting when characters expound, wheedle, extol, aver, bellow, and so on.

Modern Rule: Don’t use adverbs that end in LY, especially in dialogue.
Maugham:  (All of these quotes are from one scene)
"Well, we're not in America," said Philip frigidly.
"You don't know him," said Philip hotly.
"You do talk rot," he said crossly.
My comment: This is another Stephen King “no-no.” Even Mark Twain said, "If you see an adverb, kill it."

Modern Rule: Avoid long, run-on sentences.
Maugham: It looked as though Saturday were naturally indicated for Philip, but Mary Ann said she couldn’t keep the fire up on Saturday night: what with all the cooking on Sunday, having to make pastry and she didn’t know what all, she did not feel up to giving the boy his bath on Saturday night; and it was quite clear that he could not bath [sic] himself.
My comment: We do need to let the reader breathe, don’t we?

Modern Rule: Include lots of white space.
Maugham: (I’ll do everyone a favor and just say that one paragraph in particular spanned more than four screens on my Kindle.)

In spite of all this flagrant rule breaking, Maugham’s story was enjoyable. I can’t help but wonder, however, what future generations will consider good writing.

Learn more about my books HERE
Posted by Sandra Nachlinger at 12:08 AM