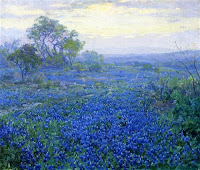 On a sunshiny spring day I topped a hill outside Dallas and the scene before me took my breath away. Flowers carpeted the hillside in a dazzling blanket of blue. The state flower had made its annual appearance.

Bluebonnets have awed Texans throughout history. Some believed bluebonnet seeds had been brought to Texas by priests, but the native blooms existed long before the padres arrived from Spain. Native American legends about the source of the flowers involved warriors knocking pieces of blue from the skies and a sacrificial maiden’s blue headdress falling to the ground, resulting in fields of flowers. Comanche lore tells of a little girl who sacrificed her doll, adorned with a blue jay feather, to bring rain to her village. The next day the tribe awoke surrounded by fields of bluebonnets. Not only was the flower edible, it brought small game as well as buffalo back to the area, thus saving the tribe. A modern urban myth warns that picking bluebonnets is against the law (not true).

In 1907 the Texas State Legislature named the bluebonnet as the state flower, but because there are five species native to Texas, controversy raged for the next sixty years as to which one should serve as the official flower of the state. In 1971 the legislature finally solved the dilemma by lumping all five species into the designation, as well as “…any other variety of bluebonnets not heretofore recorded.” 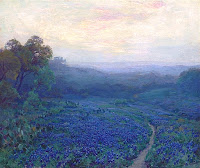 Excerpt from BLUEBONNETS FOR ELLY
(to be re-released in February):
“My wife liked to dabble in oils, and most of these are hers. She painted them years ago.” He gestured toward the one that had captured Elly’s attention. “That bluebonnet painting is from a hillside not far from here—one of our favorite places, known to a few locals. We’d go there every spring, and she spent days capturing the state flower at the height of its beauty. She always said that if fairies exist, that’s where they go to play.”

I hope you enjoyed the beautiful bluebonnet paintings I've included in today's post. They were created by Robert Julian Onderdonk in the early 1900s and are now in public domain. (Click on paintings to enlarge.)