Christmas can be an Adventure by Paty Jager

Most people think of the holidays- Thanksgiving, Christmas, Kwanzaa, Hanukkah, and New Years as a time to connect and make memories with family and friends.

My character, Dr. Isabella Mumphrey, has had a dysfunctional life with Christmas alone in boarding schools or with the housekeeper at her family's home. This year she wants a real Christmas with her new boyfriend, Tino Constantine, a DEA Agent.

Isabella is a female MacGyver/Indiana Jones character. She is an anthropologist specializing in Native American cultures and has recently joined the World Intelligence Agency (WIA) where her parents work.

Isabella and Tino met in the Guatemala Jungle in Secrets of a Mayan Moon. They found their missions intersecting in Secrets of an Aztec Temple. This Christmas story takes place before Isabella meets with her aunt at the Hopi Reservation and becomes entangled in Hopi myths and human slavery in Secrets of a Hopi Blue Star. 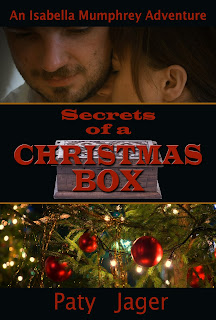 Secrets of a Christmas Box

Isabella’s plans of a wonderful Christmas are thwarted when her
father hands her a World Intelligence Agency mission. He allows Tino to help her with the mission, so they can be together. As the days hasten to Christmas can she decipher the wooden cube she’s been handed or will her first Christmas with Tino be a bust?

You can pick up this short story for FREE!!