Mail Order Brides is a very popular subject for romance novels these days. If you're a fan and can't find a story to read, then you're not looking very hard. Surprisingly, many readers don't know that mail order brides are grounded in history and fact.

Men on the Western frontier found their success in many different enterprises but lacked the company of a wife and family. With very few to no women in the remote areas of the West the ways to get those women to them was challenging. The best way was to advertise. 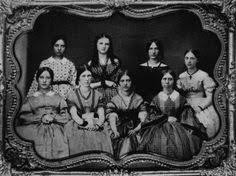 Either a woman would list herself in a catalog and was selected by a man for marriage or a man would do the reverse. The Brides came from well developed areas in the East to marry and were single, widows, divorcees, or runaways.Women agreed to marry men they didn't know to escape their present life, to gain financial security, or to seek adventure.

It's interesting to learn that a woman by the name of Eliza Farnham started the Mail Order Bride movement around the time of the California Gold Rush. She was shocked by the way the men lived their lives and horrified by their living conditions. Eliza developed a process to bring women out West for these men. The women applied by way of an application so Eliza could ensure only the best and most lady like applicants would be selected. Sadly, Eliza failed in her attempt as only three women came.

In 1864, Asa Mercer succeeded where Eliza failed. He brought hundreds of women to Seattle and they even paid for the privilege mostly because of the War. The imbalance of the women in the East and South to the men in the West spiked the interest of both genders.

Enter a groundbreaking idea by Kirsten Osbourne, that became a project, and finally publishing history. 50 Brides, 50 States, 50 Days in a row, the American Mail-Order Brides series tells the stories of 50 women all losing their jobs to a tragedy and how they try to make their way in their new world.

This 1500 word prequel is what ties together the ground-breaking American Mail Order Brides books. The project includes fifty mail order bride books, one for each state, which will be released one per day from November 19th, 2015-January 7th, 2016.
Roberta, Manager of a garment factory in Lawrence, Massachusetts, finds a very large discrepancy between the amount of money on hand and the amount her books say she should have on hand. When she calls in the owner to talk to him about it, she knows immediately the discrepancy is caused by him. After the factory burnes to the ground a short time later, she feels responsible for the women who are now jobless. Can she find a solution that won't leave all the women unemployed?

My contribution to this wonderful project is my new release, LAUREL: BRIDE OF ARKANSAS, American Mail-Order Brides, #25

Laurel Weidner desires a life of her own away from Philadelphia society and a dull, boring marriage. She is sent to live with her aunt in Lawrence, Massachusetts. When her Aunt dies in a tornado, she gets a job at the Brown Textile Mill to avoid going back home. Two months later the mill burns down, and her father threatens to bring her back to Philadelphia.

When the mill and her livelihood perish with the fire, she has no other choice but to answer an ad in the Grooms’ Gazette and become a Mail Order Bride. Will she find peace and long lasting love in the arms of a stranger?

Griffin Benning needs a mother for his children. When his wife died, he lost his two children to his in-laws who claimed to have a better environment for raising his children. He misses his family and is coerced into advertising in the Grooms’ Gazette for a wife to raise his children and work the farm in order to get them back.

Will his ad for a Mail Order Bride provide what he needs? Can he find love and happiness with a stranger? Can these two strangers find a common ground to reach their goals along with a happy-ever-after?

Thanks for visiting and Merry Christmas to you all!