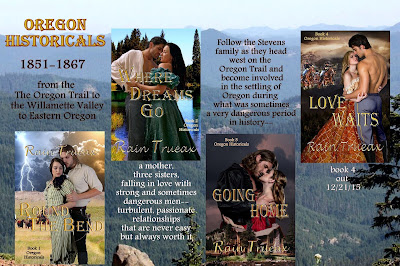 Love Waits follows the Stevens family through the tumultuous aftermath of the Civil War and into a new love story. 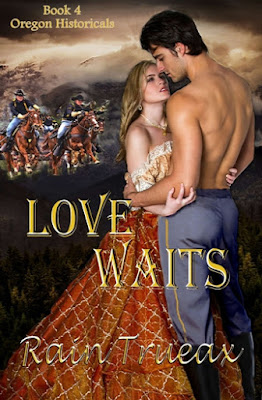 The blurb for Love Waits:


As a Pinkerton agent, Belle Stevens Morgan has led an adventurous life, far from her beloved family. On assignment in Oregon to investigate counterfeiting, she is posing as a governess in the employ of a wealthy and ruthless man. Lies are her stock in trade. To her regret, she has never forgotten the young cavalry officer, who rejected her love when she was seventeen. Meeting him again, in the midst of an Indian attack, she fears she still loves him and to no more avail than ten years earlier.

Captain Rand Phillips is asked to take on one of his most dangerous assignments regarding an attempt to start a new rebellion, with the Civil War barely over and the country still in turmoil. The biggest danger of all, however, may be to his heart as he sees the woman Belle has grown to be. He pushed her away when she was little more than a girl. It won’t be so easy this time—especially since she may be his one hope for survival.

When two warriors meet, with secrets between them, danger is bound to be in the mix. Sometimes to win, one must risk it all. Book Four in the Oregon Historical series, with characters from the earlier romances, Love Waits is about a love that is strong enough to wait for its time—and fight for its fulfillment.

The shots increased. The Indians whirled to meet the new charge before they headed their ponies north and out of the small valley. It was then that Belle realized the new arrivals were wearing uniforms. The cavalry had arrived.

Pa Jamison opened the front door with a big grin as the soldiers hauled their mounts to a halt. “You got here in the nick of time,” Pa said with a laugh.

A tall man, covered with dust and looking totally worn stepped from his saddle, took off his hat and hit it on his thigh to knock the dust from it as he walked toward Pa. Belle knew his rugged features even with the bearded stubble on his square jaw. Rand Phillips.

Book available at these sites: