How the Texan Stole Christmas
by Jacquie Rogers 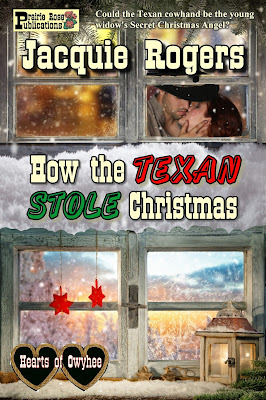 The snow blows nearly sideways as it blankets the range. Ranch hands hunker down in their saddles, scarves over their ears and their Stetsons protecting them from the fierce wind. They dream of a warm fire and hot buttered rum. But they have livestock to save from freezing and starvation, so they ride on.

That was Christmas on the rugged open range. Miserable for man and beast. But it wasn't just another day at the office, so to speak. They whittled gifts for one another, sang a few carols as they sat around the campfire warming their hands and feet. Cook had given them a hot meal--the finest beans with maybe some meat thrown in. And with a little luck, Cook would've baked an apple pie. Life couldn't be better and they thanked their lucky stars for a sound horse and solid tack.

Christmas on the farm

Everyone has chores to do every day, then and now. Whether holiday or not, farmers have to milk the cows, feed and water the livestock, gather the eggs, and tidy the barnyard (to use a polite term), making such repairs as required.

So after the chores were done, the family could then gather together and celebrate Christmas with what meager resources they had. If they didn't have evergreen trees to spare, they might decorate a sagebrush with popcorn and berries. They made ornaments with precious bits of paper and scraps of cloth. Peach tins made nice ornaments, too, and they shine in the firelight.

Their celebration might be more humble than those in the eastern cities, but they had a grand time, nevertheless. The women cooked for days. They were resourceful and whatever they had available would do for a fine pie or stew. The Christmas feast could consist of chicken, venison, or maybe a ham, along with homemade rolls, freshly churned butter, potatoes and gravy, and pies--maybe one made with dried apples, and a vinegar pie.

Each family member made modest gifts for the others and even the smallest child labored over precious gifts--maybe a drawing or a doll made of sticks. They sang carols, maybe read the Bible, and if they were close enough to town, maybe even went to church.

For most Christian families, Christmas was a day for family togetherness and to show their love and appreciation for one another, as well as celebrating the religious aspect of the holy day.

Christmas for Outlaws, Gunslingers, and Cyprians

The saloon owner brought small gifts for the working ladies, the bartender, the resident gambler, and a few of the regulars. A few cowpunchers bestowed gifts upon their favorite girls. They might have had a nice meal together before the saloon (or brothel) opened for business, and even then, the customers were few. It's one night they could relax.

When I was researching for my Hearts of Owyhee series, I ran across this item from the December 21, 1872 issue of The Owyhee Avalanche (the oldest newspaper in Idaho, still operating out of my hometown, Homedale, Idaho):

THE CHRISTMAS TREE. The Christmas Tree Festival will be held in Jones & Bonney’s Hall. We will stake in addition to what was said in our last issue, that the Brass Band, composed at present of Messrs. Charles Leonard, Joe Gross, Benj. Davis, Rufus King, Ferd. W. Frost and E. Douglas, will perform some of their best pieces, which will add greatly to the pleasure of the occasion.
The singing, accompanied by the organ, will be done principally by young girls who have learned all the music they know in Silver City, and who by virtue of talent, industry and a good teaching have acquired, in our judgment, wonderful proficiency in the beautiful art over which the Muses preside. They are our little folks, and not imported singers, which will make it all the more interesting; that they will do their part in first-class style for their ages, we have not the least doubt, in fact, we know they will.
The tree will be a prolific one no doubt. The Argosy of Santa Claus, St. Nicholas, & Co. arrived at the port of San Francisco four days ago, as we are informed per telegram, and a large cargo of its merchandise is on its way up here, and will not fail to arrive in time. ~~

I could just see the hustle and bustle of Silver City. 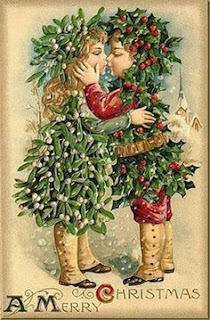 Brass bands were wildly popular all over the West then.  Yes, they decorated and put up Christmas trees.  They had dances and concerts.  And Santa was on his way!

So why not have a Secret Christmas Angel event for all the single men and women in town?  Seems like something they'd do.  And that's what How the Texan Stole Christmas (a Hearts of Owyhee single read) is all about.  Here's the blurb:

Winnifred Spangler has thrown herself into community work to ward off the pangs of her lonely heart. Fairview, Idaho Territory, is snowed in—and cabin fever has set in with a vengeance. Winnie organizes a gift exchange for the town’s single young adults. Her hope is that a few of them will find the loves of their lives.

Judd Shaw, a Texas cowhand, hates the ice and cold. As soon as the roads are passable, he’s headed back to Texas. But thanks to his childhood friend, he’s caught up in the Secret Christmas Angel game, and the name he draws is the prettiest widow in all of Idaho—Winnie.

Want to win a free book?
Tell me about your favorite holiday tradition--any holiday!
Winner will be picked at random Dec. 6, 2015, at 8pm Pacific Time.
Be sure to include your email address with your comment!

Happy Holidays to Everyone!


Romancing The West | Pickle Barrel Bar and Books
Posted by Jacquie Rogers at 5:24 AM