three novellas or a novel 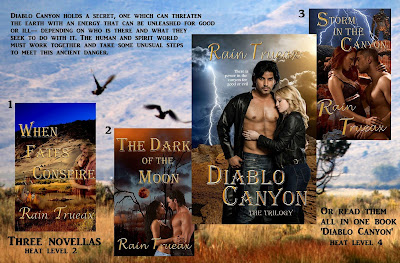 It was a sad day when my cat died. I’d lost Pepper, at 3½ years old, to a congenital time bomb, where there was no fixing it. I frankly was heartbroken. For assorted reasons, I had believed her spirit had returned to me three times in different cats. Looking for comfort, I asked for a dream that would help me understand if reincarnation was real. I wanted to believe she’d come back. I wanted to believe life was fair.

The dream that came was not about her. It was about reincarnation. It was about the question of fairness. From where do such dreams come? I have no idea. This one told a story, had characters, and some very intense images. The next morning, thinking it through, I decided a dream like that, even though it wasn’t exactly a typical romance, was a gift that should be shared, for others to make of it what they would.

My dreams only provide bare bones of a story. In fleshing it out, I added Montana, a Native American element, and a bit about ranch living. Given my own life, I like writing about ranches, but for a supernatural novella, there was another plus. There is little more earthy and practical than ranch life. To juxtaposition that with the mystical was like adding contrasting colors to a painting to make it more vivid.

When I finished When Fates Conspire, I knew there was a second story. The Dark of the Moon was more involved with the ranch and had an older heroine. Finishing it, there needed to be a third.  Although the three romances each stand alone, the thread through them needed an ending, an explanation. That became Storm in the Canyon.

I consider the three to be more metaphysical romances than paranormal. Yes, there are spirit guides, demons, shape-shifters, spiritualism, plasma bolts, energy hot spots, reincarnation, monsters, druids, and sorcerers... Okay, maybe they are paranormal romances, but hey, no werewolves, zombies or vampires. (The metaphysical world is made up of happenings people claim to experience where paranormal can be anything.)

With three novellas, I decided (partly to get a paperback) to turn them into one book, Diablo Canyon. Therein lay a problem. When you offer three novellas or the book, even when you explain it in blurbs, the reader can mistakenly buy all four. No writer likes unhappy readers. I could have taken the novellas off-line, but I had a reason to keep them.

Although I find writing page after page of a sexual encounter to be boring, I like some steam in the books I read or write. Novellas, as I write them, have little word space for steam. For Diablo Canyon, I added it.

Knowing how some readers dislike heat, I kept the novellas. When Fates Conspire, The Dark of the Moon, and Storm in the Canyon as they were—with the closed door. In all other aspects, the novellas and the novel tell the same story. I’ve never done this before, probably won’t again, but it was an interesting experience—the hard part was making sure readers understand the options.