First of all, I'm celebrating this week because I just found out that the third book in my Hearts of Owyhee series, Much Ado About Miners, won a Laramie Award for Western Romance/Comedy Novel.  The Laramie Contest is sponsored by Chanticleer Book Reviews, and I'll be attending the conference in September, so if you're in Bellingham, WA, stop by and say hi.

What's a celebration without a fantastic dessert!  You know, a sumptuous mouthwatering dessert.  But, alas and alack, I can't eat grains of any sort, and that pretty well puts the kabosh on cake and pie.  Unless, you're really determined, which I was.  Besides, it was my birthday. 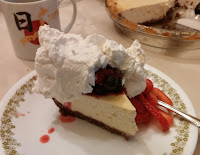 I love, love, love strawberries.  Who doesn't love cheesecake?  But hey, to watch my girlish figure--or more accurately, to find where my girlish figure is buried in all the fluff--I'm eating low-carb these days.  So no grains at all and low carbs.  Sounds kind of dismal, doesn't it?  Certainly doesn't sound celebratory.  Drat. 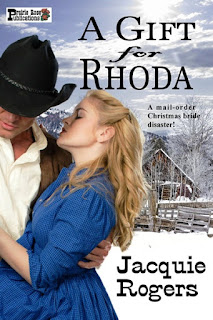 But one thing about being a resourceful cook, you can figure out all sorts of things, so I went looking for low carb cheesecake recipes.  I found on on the About Health website, added a little arrowroot flour, and used the pecan crust from the recipe in the back of A Gift for Rhoda, my new release, except I substituted stevia for the honey.  Yum!

Speaking of A Gift for Rhoda, it hit #11 on Amazon's western short stories bestsellers list.  Woohoo!  I got the idea for the story when a friend's son was picking out a gift for his girlfriend, only she didn't know she was his girlfriend yet.  That amused me, but also got the wheels turning, and I wondered what would happen if a mail-order bride was expecting her unwanted groom, but another man showed up bearing gifts.   First, I had to figure out why she didn't want the man who'd paid her fare to Idaho, then I had to conjure up the setting.  My aunt and uncle live in Garden Valley, Idaho, so that seemed like a good spot.  The hero, well, he just bounded into the story--I didn't have to do anything but listen because he really wanted me to tell his story.

What have I been reading lately?  J.R. Roberts' The Gunsmith: Trouble in Tombstone.  I like to read genres other than romance once in a while, so this one's it for this month.  There are 404 Gunsmith novels and every one I've read has been good.  I also read Meanwhile, Back in Deadwood, the latest by Ann Charles.  Violet Parker really gets herself in a mess this time.  I laughed all the way through, except when I was chewing my nails, and even then.  I recommend both these books.

Until next month!
Hearts of Owyhee

Posted by Jacquie Rogers at 5:39 AM