By Mary A. Adair

This is a heart-warming story. McClintock’s Reluctant Bride is book 3 in the McClintock series and is every bit as good as the books before. I love Ms Clemmons’ attention to detail and historical accuracy. The characters are well developed, the storyline well-plotted, and the ending totally satisfying.

The story opens with handsome rabble-rouser, Josh McClintock, celebrating his 24th birthday with family and friends.  Josh is a son of the successful McClintock ranching family. He is handsome, rich and self-assured. He suffers no loss when it comes to finding feminine companionship whenever he wants it. Everything is going his way.

That is until he wakes up, half dressed, and being dragged out from under the bed of beautiful Nettie Clayton. In a drunken stupor he had mistaken her house for another, left his horse in plain sight in the front yard, climbed up to the second floor, crawled into Nettie Clayton’s window and onto her bed! Worse, when he wakes he is staring up at her extremely angry father.

Yep, you guessed it, shotgun wedding, loss of freedom to carouse and basically live the ideal life of the most eligible bachelor in town. However, not all is lost. Nettie Clayton may be high-tempered and demanding, but she is also unquestionably beautiful. 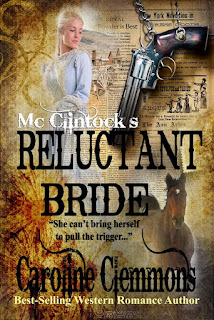 Nettie Clayton’s life is finally coming together.  Her family no longer lives in the coal mining town of Lignite, Texas. They now lived in McClintock Falls where her parents live in a modest, but beautiful home and her brother is free of the expectation of a lifetime of working coal underground. Nettie looks forward to her new position as a teacher in the local school. All is right with her world, or was before Josh McClintock climbed into her room through a window and then passed out on her bed.

Into the mix, throw a man who lost his ranch when he couldn’t pay taxes or the mortgage. Rather than owning up to the blame for his misfortune, he blames the McClintock family after they bought the ranch at the sheriff’s sale. The villain causes terrible trouble for the McClintock family and for Nettie in particular when he decides to take back his home.

This was a delightful story of growing trust and love. I give McClintock’s Reluctant Bride 5 Stars