When I wrote Marshal in Petticoats I hadn't planned on a series. It wasn't until the book was contracted and the editor asked me when the next brother's book would be ready that I realized I'd written myself into a series.

In Marshal in Petticoats I gave the hero four brothers, pulling names out of the air, without knowing I would be writing their stories. But as I wrote each story they became familiar, almost like family, to me. With each book there were secondary characters added who also became like family. That is what prompted the sequel trilogy, Halsey Homecoming. These are three books written about the young men who were brought into the Halsey family through marriages and acquaintances.

The final book Claiming a Heart is about the blind boy who tripped over Clay Halsey in the beginning of the book Doctor in Petticoats. He became an important secondary character in that book and Clay moved him to Sumpter, Oregon making him a part of the family.

While Claiming a Heart is the final novel about the Halseys, there will be a Christmas novella coming out in October that features Shayla, the daughter of Aileen in Miner in Petticoats. This novella, A Husband for Christmas, will give everyone, including me, the closure we need to know the family will thrive and be happy. ;) 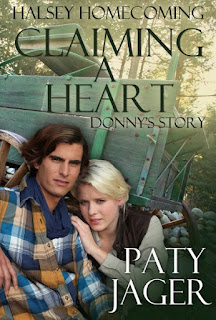 Blurb for Claiming a Heart


Book three of the Halsey Homecoming historical western romance trilogy that is a sequel to the Halsey Brothers Series.

Callie MacPherson - or Mac - is hiding from the law. When she witnesses a group of lawless thugs beating a newcomer, she drags the innocent man into the underground tunnels of Pendleton. Caring for the man, Callie discovers she hasn’t become as hard-hearted as she’d feared.

Donny Kimball’s loss of sight didn’t blind his heart. It can see far more than his eyes ever could. His heart tells him Callie MacPherson needs him as much as he needs her. If only he can convince her of that before they both get killed.