I Took My Husband to RWA, He Wasn't Prepared...

Every year. Romance Writers of America (RWA) holds a large convention. Going was never high on my bucket list, but this year it was planned for NYC, and my editor at Random House Loveswept wanted to talk to me for a bit. So I asked Calvin what he thought of the idea because we go everywhere together. We've only been married for 12 years, so we're still in that honeymoon stage. If we took the Amtrak, he was for it. He didn't want to have to fold his tall frame into another airplane seat. He's still grumbling about our last flight to Paris.

I was able to reserve a room in the same hotel the convention was being held in, which was the Mariott Marquee on Times Square. Sounds fancy-smancy, doesn't it? Well, we had to go to the 8th floor to register since there was a theatre on the lower floors. From there, you walked over to a large circular bank of elevators, pressed the number of the floor your room was on and it gave you the letter of the elevator--from A to N--that would take you to your floor. This changed every time you used the elevators. Sometimes you had to run around the circle to reach your elevator before the doors closed and, at others, you had to wait. Being a small town lady in a big town environment, this was all new to me.

Calvin glanced around at all the women in high heels pulling their luggage. His eyes grew large. "Do you think all these women are for the convention?" I told him they were and bit the inside of my cheek. You see, I may have forgotten to tell him how many would be attending. The man's not wild about crowds; being a retired school teacher, he's more comfortable visiting local schools and reading to students. But the moment of truth came at me like one of those NYC taxis. His grey eyebrows furrowed.  "Angel, how...how many are coming?" When I told him 2500 writers plus agents and editors, the poor man sucked air and paled. 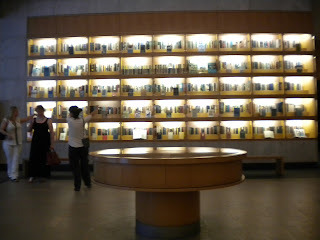 The day before the convention began Penguin Random House had us at their building for a meet-and- greet. The walls of their reception area is full of books--old, new, and famous. They had a poster up welcoming the authors of the Loveswept line and I was thrilled to see my third book's cover with them, top row, second from left. 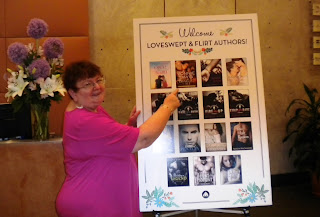 My feet swell when I travel and being in heels didn't help my painful tootsies any. When we left their offices, Calvin hailed an SUV taxi. I was having trouble getting in. The cab driver jumped out, cupped my large behind and all but heaved me into the back seat. Then...THEN, he had nerve enough to charge us $1.50 extra for the "extra handling."

Now allow me to say a few things about the cab drivers there. First, they don't need to know how to count since they zoom down the four-lane streets five and six cars abreast. All their cabs need are strong breaks and loud horns. All you, the passenger, need are blindfolds, a large bottle of nervie-dervies, and a wad of twenties because it seemed everywhere we went cost us twenty dollars.

Although Loveswept is an ebook only line, Random House published thirty books for each author to give away at our author signing. How was I, practically a nobody going to stand out among all those big names? I'd channel Effie, my pink haired grandma from my Beloved Highlander series. I even made pink pelican baffies like she constantly wears in the books.
﻿﻿﻿