Recognition Lives in Our Senses by Joan Reeves 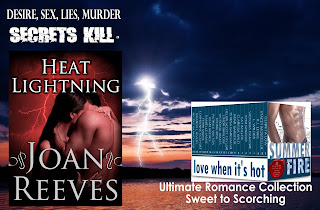 What would you do if you recognized someone by his touch--his scent--the minute you met him?

When your eyes meet his, heat inundates you. Yet, you remember nothing about him.

That's the situation that confronts the woman known by the hospital staff as LG--Lost Girl--when she meets handsome David Galloway. He says he's her husband, and he has documents to prove it. Yet, she remembers nothing about him or their life together.

Their eyes meet. Desire flares like heat lightning in the night sky--spectacular but quiet with no accompanying thunder. The stormy emotion she sees in David's dark eyes tell of his passion as well as the secrets he hides.

Heat Lightning, part of the Summer Fire Ultimate Romance Collection, is the story of memory and lies, secrets and desire. Secrets can kill. Can love--true love--conquer all?

Her husband found her, claimed her, rescued her. Desire flashes like heat lightning on a summer night between David and Tessa. She knows his touch, but when she looks at him, he is a stranger to her. Not a flicker of memory is left of him or their life together. Everything and everyone she knew is lost to her since she awakened from a coma. All she has left are questions. Who is she? Why does David seem to hate her even as he pulls her into his arms? What is he hiding? How can she trust him when her gut says, “Trust no one”?

Drenching rain pummeled the roof of her old Porsche. She stared with tear-swollen eyes through the windshield and wondered where the hell she was. Not that it mattered. Nothing mattered any more. Not the wrong turn she’d taken many miles back. Not the summer storm that had ambushed her. Nothing.

She hadn’t seen another vehicle on this narrow blacktop road that cut through a densely forested area. Wind whipped the pines and oaks that lined both sides of the two-lane road. She was alone in the stormy night. All alone. Just like she’d be for the rest of her life now that she’d driven him away. Bitterness and hatred filled the crack in her heart. She gulped back a sob.

Bright light suddenly filled the interior of the small car. The light was so bright it seared her burning eyes. She jabbed at the rearview mirror to tilt it up and pressed down on the accelerator to put a little distance between her car and the driver behind who seemed intent on blinding her. Her little car lurched, fishtailed on the wet pavement then straightened out. The headlights behind receded.
The trees thinned. A quarter of a mile later, she drove out of the woods. Fading daylight showed an old high-arching bridge ahead. Below the bridge, she could just make out the flood-swollen river boiling around wooden pilings.

Light behind again filled the car’s interior. She accelerated, but the lights drew closer rather than fell behind. Fear whispered up her spine, raising the tiny hairs on the back of her neck. She glanced into the rearview mirror, eyes narrowed against brilliant white light that drew near as she watched.

Fear didn’t just whisper now. It shouted. She knew who was behind her. She grabbed her cell phone from where she’d tossed it on the passenger seat after turning it off. With shaking fingers she tried to power it on.

Crash! Her head whiplashed back then forward, striking the top of the steering wheel. Pain slammed through her. The cell phone flew out of her hand, landing somewhere inside the car. The other vehicle struck the rear of her car again. She fought the steering wheel. The lights came at her again.

Fear sliced through the pain in her head. She tried to brace herself. Another bone-shaking crash, and she lost control of the car. Her car struck something metal. Her head hit the side window. She nearly blacked out.

Rain and wind blew into the car through the broken glass, spattering her face. The car was motionless. Silent. She touched her throbbing head and came away with blood. Her thoughts were confused. All was silent except for the rain and the groaning of wind-whipped tree branches.

The sound of a racing engine cut through her confusion. Panicked, she peered through the broken windows. Through the falling rain, she could see a big black truck.

Stark terror gripped her. The lights on the truck flashed on. She didn’t even have time to scream. The truck hit her car broadsided. Metal crushed. Glass shattered, cascading over her. Tossed from the driver’s seat as if she were a rag doll, she finally screamed when the stick shift rammed into her right side.

Tortured metal screamed against metal. She smelled burning rubber and heard the whine of tires spinning on pavement. Her car moved. Inch by inch, the pickup shoved the crumpled car toward the side of the road. Metal bent and popped.

Oh, God! She’d been a fool. She’d come prepared for the confrontation, for her vengeance, but she’d run like a scared little girl. She tried to open the glove box to get the pistol, but the catch wouldn’t yield. Tears of frustration and anger, pain and loss flowed down her face. If only she could have wiped away the past and truly created the new life she’d wanted so desperately.

Another vicious shove, and the car slammed against the barricade of upright wooden posts.
Her last thought was of him. She loved him. But she’d ruined his life. Now she’d never have a chance to explain.

Would he mourn her?

Wood was no match for metal. The powerful truck gave one last violent push. The timbers snapped as if they were twigs, and her car went over the edge of the road.
Then she and her car were falling.

Into the cold black water below.

I hope you enjoyed this excerpt. For a limited time, the Summer Fire Contemporary Romance Collection is only 99cents. Grab the box set today from any of these ebook sellers!

Please leave a comment with your email address and be entered in a random drawing for a free copy of Summer Fire: Love When It's Hot Contemporary Romance Collection. Giveaway is open until May 23. Winner will be chosen on May 24 by Random Name Picker and notified by email as well as in the Comments section of this post on Smart Girls Read Romance.


Joan Reeves, whose book in Summer Fire is Heat Lightning, is a bestselling author of Contemporary Romance. Available as ebooks and audiobooks, her romance novels all have the same underlying theme: “It’s never too late to live happily ever after.” Joan lives her happily ever after with her husband in the Lone Star State. Sign up for WordPlay, Joan's free email list for readers: http://eepurl.com/Yk61n.
Posted by Joan Reeves at 1:00 AM