By Anna Jeffrey (who is also Dixie Cash)

I always have more to do than I have time for. So now all of a sudden, I'm working on 3 different books.

Next, I'm getting started on Book #3 of my Sons of Texas trilogy, THE HORSEMAN, that I believe will be 100,000 words and will be a plotting challenge. This book will tie up loose ends and complete the trilogy's story arc. I'll be lucky to finish this one before the end of the year.

And at the same time, I'm about a quarter of the way into another Dixie Cash epic, YOU CAN HAVE MY HEART, BUT DON'T TOUCH MY DOG. 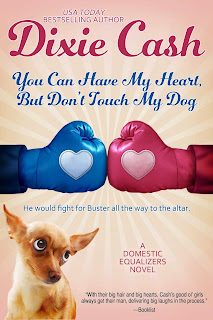 As always, the cover was designed by the Killion Group and as usual, they've done a great job. Here's the blurb so far (but it's subject to change):


After two divorces, Trudy Coffman, Edwina's niece and entrepreneur extraordinaire, is on her own and loving it. She has made a success of the only gourmet pet food bakery in Midland, Texas. She’s a devout animal lover and a pet foster parent. When a golden-colored stray dog with an abundance of personality appears at her door, she can’t refuse him and she can’t keep from falling in love with him. She names him Waffle and gives him a permanent home.

Nick Conway has searched for months for his lost dog, Buster. Giving up on ever finding him, he looks for a new dog and finds a puppy that interests him at a pet grooming shop. While he went to the shop to see a puppy, he also encountered a beautiful redheaded woman he can’t put out of his mind. Little does he know that she found Buster in an alley months back and has now claimed him as her own. Things heat up between Trudy and Nick in the romance department, but sparks fly when he learns that she has custody of Buster and refuses to give him up. It will take a sitting judge to resolve this conflict.


To add to the fun, Trudy has taken in a foul-mouthed parrot that has plenty of opinions and even advice. Her only hope for him is for her Aunt Edwina to take off her hands and give him to her husband Vic as a present. Confusion and Domestic Equalizers mayhem can only follow. Look for this book to be released in the fall.
Posted by Unknown at 1:00 AM