Today is a perfect day to read a romance novel. Or two.

For those of you who have not subscribed to Kindle Unlimited, it’s a service on the order of Oyster or ScribD, or Netflix for books as some have described it. For a flat monthly fee, you can join and read an unlimited number of books every month.

THE CALLISTER BOOKS is a 3-book bundle with stories set in a small fictitious town in Idaho. I emphasize the word “fictitious” because though there is no such town as Callister, readers have told me they know right where it is. The stories in the bundle are THE LOVE OF A COWBOY, THE LOVE OF A STRANGER and THE LOVE OF A LAWMAN. 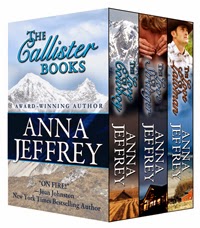 A recent Amazon reviewer who gave it a 5-star review said this: "Each one [of these stories] was filled with so much heart that I couldn't put them down."

SWEET WATER is an award-winning book I wrote for the West Texas Series. It’s classified a “western,” but why I don’t know, other than the fact that it’s set in far West Texas. Neither the heroine nor the hero is a cowgirl or cowboy.

“Terry Ledger, wealthy developer of upscale sub-divisions and builder of high-end homes, is used to his projects changing peoples’ lives. Little did he know that his purchase of the tiny West Texas town of Agua Dulce and his association with its quirky citizens would be a life-changing event for himself. ….. Marisa Rutherford, the ostensible mayor of Agua Dulce, manager of the only cafe, flea market and tourist trap and nurturer of her dying mother, never expected to have to protect the town’s odd population from an outsider like Terry and his plans. Nor did she expect to find the man of her dreams in the instigator of so much trouble. Can she reconcile her heartfelt feelings for him with the loyalty she feels for Agua Dulce’s citizens?”
<><><><>
So if you’re a subscriber to KU, you can take advantage of these 2 reads. If you aren’t and want to read them, the regular price of THE CALLISTER BOOKS bundle is $6.99 at Amazon and SWEET WATER is $2.99.
Have a love-filled day, everyone.
Posted by Unknown at 8:32 AM

Email ThisBlogThis!Share to TwitterShare to FacebookShare to Pinterest
Labels: alpha hero, Anna Jeffrey, contemporary romance, drama, Idaho, Texas, Texas Romance, The Callister Books, The Love of a Cowboy, The Love of a Lawman, The Love of a Stranger