For a host of reasons, I rarely go to a movie theater to watch a movie these days. However, I am going to make a special effort to see this one because I have no idea when it will make its way to TV or a retailer. And I can't wait to see it. 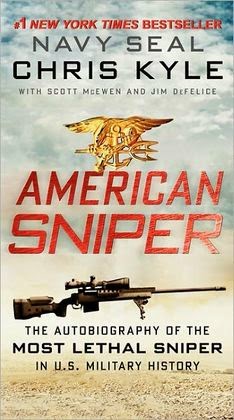 I had already read this book twice before I learned that the movie would be made with Bradley Cooper starring as Chris Kyle. When I heard that, I thought "Boo, Hiss." I could not imagine Bradley Cooper as a warrior or a war hero.

I had the same reaction when I learned that Robert Duval and Tommy Lee Jones would star as Gus and Call in "Lonesome Dove."

Just goes to show you what *I* know. Now that I've seen "Lonesome Dove" about a dozen times, I can't imagine anyone else in those roles and I don't even remember who I thought should have played those parts in the first place. From the reviews and the trailers I've watched of "American Sniper," I suspect I'll feel the same about it.

Irony is something that has always astounded and often overwhelmed me. His being murdered on American soil is an irony that leaves me breathless. We'll never know how his life would have turned out had he lived. I have always believed tragedies occur for a reason, though it seems unfathomable at the time. One thing horrible events do is bring us off our high horses and show us there's something out there bigger than we are. In many ways, tragedy brings out the best in us.

People who have seen this movie say there is dead silence at the end of it, that no matter who makes up the audience, there's a reverence on display. And the audience doesn't  rise and rush out of the theater like in so many movies. I'm glad. Maybe this story touches everyone who sees it or reads it the way it touched me. Maybe Chris Kyle's true mission in his life and death is what is going on now. Thank God his wife is heroic in her own way and is carrying on in his stead.