THE SONS OF TEXAS TRILOGY

by Caroline Clemmons
for Kathy Shaw


Anna Jeffrey is a member of this blog and a friend. She is never one to toot her own horn, so you may not know what a tremendous author she is.

If you read the first of Anna Jeffrey’s Sons of Texas Trilogy, THE TYCOON, then no doubt you joined me in eagerly waiting for THE CATTLEMAN. Anna did not disappoint readers with this book. 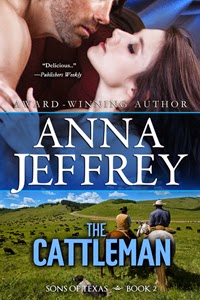 Unlike his older brother Drake, Pic Lockhart is a rancher. After a failed early marriage that cost his family big bucks, Pic is hesitant to marry again. Not that he’s unable to commit. He and Amanda Breckinridge love one another and are a long-standing item. But only in the privacy of her home or an evening drive to another town.

Amanda is the award-winning swimming coach and English teacher whose private life is overlooked by the school board, probably because the Lockhart family makes large contributions to the school and community. Although she longs for more than their current situation allows, she hesitates to press Pic for fear of losing him. But he’s more likely to lose her.

In the first book, we learned of the senior Lockhats’ tumultuous marriage and separation. That situation continues, but Pic’s mom occasionally visits the Double-Barrel Ranch to interfere in the lives of her children and the cheating ex-husband who still loves her. Mama can’t stand the fact that Pic is seeing “a nobody” of whom she disapproves and arranges for him to meet the daughter of a friend. Zochi, that friend’s sexy daughter, tests Pic’s self-control.

In the meantime more mischief is being orchestrated against the Lockharts on several levels. Although readers won’t learn who is behind the problems (I have my suspicions) until the next book, THE CATTLEMAN ends with Pic’s life firmly set to rights in a way that satisfied this reader.  Now I can hardly wait to read the third book when it’s released. 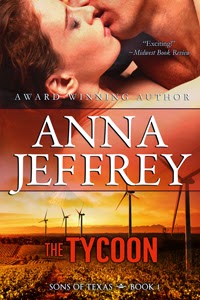 I give this book 5 out of 5 stars. If you enjoy Linda Lael Miller and Joan Johnston, you’re sure to enjoy THE TYCOON and THE CATTLEMAN.

Anna Jeffrey is an award-winning author of romance novels as well as romantic comedy/mystery. She has written 9 romance novels and co-authored 7 as USA Today Bestselling author, Dixie Cash.

Anna is a fifth generation Texan. She was born and grew up in West Texas, where most of her family members were farmers and ranchers or worked in the oil fields. She left Texas for many years and lived in four of the western states, a rich experience she’ll never forget.

She loves most things western, from the customs and culture to the philosophy of life. She enjoys many hobbies, i.e., reading, painting and drawing, crafting, needlework and beading.

These days, she’s back home in Texas. She and her husband currently live in Granbury, Texas, a small town not far from the Dallas/Fort Worth Metroplex.