ALL ABOUT INSPIRATION...WHEN IT'S READY

Thanks for having me here today! One thing I love about having a new release is that I get to visit a lot.

When my younger son and his wife married, they moved to Vermont the day after the wedding. Since I couldn’t keep them in Indiana forever—it’s amazing how independent kids get—I comforted myself by saying at least now I’d get to visit Vermont, which I’d wanted to do since reading Understood Betsy when I was eight or nine.

You know how sometimes you anticipate things until you’re practically jumping up and down with the great expectations that are skating wildly through your mind, only to be disappointed? Let down because...well, what actually came to pass was somehow less than you’d hoped?

The first time I went there―during mud season, no less―I felt as though I’d come home. Over the next 15 years, I visited close to 20 times, and it never got old. Its beauty, culture, and the people who live there filled a huge place in my heart I never even knew was empty. Naturally enough, I wanted to place a book there. This would require several research visits, of course. So I started one.

What was wrong? I had the inspiration, acres and acres of it. I had people (I always get them first. Do you?). I had a story. Why wouldn’t it work?

I still don’t know the answers. I only know that when we visited Ireland, the storefront of a pub in Kinsale caught my writer’s eye (not to be confused with my regular eyes, which never watch where they’re going, but that’s a different story) and never went away. When I finally gave my pub a name and a home, its setting was a small town in Vermont. The writing of Back to McGuffey’s went quickly enough I never got a chance to go back for a research trip—though there were many, many emails exchanged with Vermonters who could look out their windows and see what I was trying to imagine.

I love inspiration. As a writer without much of an imagination, I depend on it. But I think it would be nice if just once in a while, it came around when I wanted it instead of in its own time.

:
Liz retired from the post office and promised to spend at least fifteen minutes a day on housework. Not wanting to overdo things, she’s since pared that down to ten. She spends non-writing time sewing, quilting, and doing whatever else she wants to. She and Duane, her husband of…oh, quite a while, are the parents of three and grandparents of the Magnificent Seven. They live in the old farmhouse in Indiana they moved to in 1977. They’ve talked about moving, but really…37 years’ worth of stuff? It’s not happening! 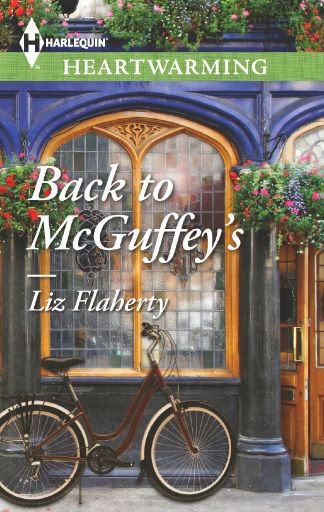 The one that got away

Could Kate Rafael’s day get any worse? First she lost her job, then her house burned down and now her ex is back in town. Apparently, Ben McGuffey's taking a break from being a big-city doctor to help at his family’s tavern and reassess the choices he's made for his career.
Ben ends up giving Kate a hand...then giving her kisses...and finally, a second chance. But when a local teenager shows them both a glimpse of what it means to be a family, Ben wonders if having kids in small-town Vermont would clash with his ambitions. Or can he truly come home again…to Kate?

Excerpt of BACK TO McGUFFEY'S:

Ben leaned into the bed-and-breakfast’s kitchen when he got back on Friday afternoon, and her heart quickened, beating a tattoo against her ribs that made her a little light-headed.
“I’m off to the tavern pretty soon,” he said. “Morgan’s talking mutiny, so I’m working the weekend. See you later.” He ducked out, only to stick his head back in a moment later. “If I need you, will you come and help?”
She thought for a moment of her weekend plans. There was a trip to the wholesale grocer tomorrow afternoon and church on Sunday. At some point, she would most likely clip her toenails and work highlights through her hair.
She could probably spare the time.
“Okay.”
“I’ll take you bowling Sunday night,” he promised. “Not that you could beat me, but it will be fun.”
She snorted. “On your best day, if I gave you twenty pins, you couldn’t beat me.”
“Those are mighty big words for such a little woman who probably doesn’t remember where the bowling alley is,” he drawled.
She laughed. “You forget, tall guy, I stayed here while you went to the big city. I bowl on a league in the winter and teach it to kids on Saturday mornings from January through March. Winner buys dinner? Just remember how much I like steak.”
“Uh-oh, I’m scared.” With a wave, he was gone, loping across the yard to his apartment, and Kate sighed, feeling the emptiness he left in his wake. She kneaded dough for the weekend’s cinnamon rolls, pushing and pushing and turning over and trying not to hurt.
She liked being a temporary innkeeper. It was interesting meeting guests from faraway places and walks of life she knew nothing about. After nearly twenty years of living alone, she enjoyed sharing space with other people, especially since she had plenty of room and time to be alone if that was what she wanted.
But it wasn’t enough. She wanted a family. She wanted children she didn’t have to give back and she wanted to be in love. She wanted a man to look at her the way Dan looked at Penny.
She thumped the dough into a greased bowl and placed it on top of the refrigerator.
Standing at the sink, washing her hands, she watched Ben’s bicycle ride away. He’d been wearing a helmet all the time lately as part of teaching Jayson to ride. It made him look a little goofy, and she’d laughed uproariously the first time she saw it. His response had been to buy her a matching helmet and refuse to ride with her unless she was wearing it.
What a great father he would be.
There’s an emptiness to it, she remembered her sister Sarah saying during the couple of years she and Chris had had fertility problems. It seems as though everyone we know is either pregnant or they already have children. I don’t know what to talk about anymore.
Kate had seldom felt that kind of emptiness. She had friends, such as Joann, who had chosen to remain both single and childless and were perfectly happy that way. Kate had never minded it, either. Until recently. Until the doctor reminded her as kindly as he could that her reproductive time was running out.
She didn’t have a “why me?” personality. She’d even printed “Why not me?” in a 72-point font and stuck the paper to the front of the inn’s refrigerator to remind herself that she wasn’t the only person whose dreams had been deferred. She hadn’t really cried over her house until Penny poured her a pint Mason jar full of wine and told her no one liked a martyr. Then, of course, she had wept buckets. She didn’t like martyrs, either.
The truth was she didn’t want to be a single parent. She didn’t think it was wrong—some of the best parents she knew were doing it on their own—but it wasn’t right for her. She wanted not only a basketball hoop in the driveway, but a tall guard to partner up with her small forward in the game of parenting.
The thought drew her glance to the front of the refrigerator. Beside her self-directed “Why not me?” sign was a snapshot of Ben and Jayson on the inn’s driveway. Jayson was mid-dribble with the basketball, his tongue sticking out the corner of his mouth as he concentrated. Ben’s arms were up, and only someone who knew him well could tell he wasn’t really trying to stop his opponent.
What a great dad he would be, she thought again. What a great guard.